A good wig is hard to find. Just ask Tyler Perry, who is tired of the mean tweets his hit BET drama Sistas constantly attracts.

The soapy series (which is currently on hiatus and resumes Season 3 on Wednesday Oct. 13) follows the turbulent love lives of five gorgeous and highly successful Black women in Atlanta. The women, who are all friends, rock a myriad of hairstyles including culturally astute natural braids and twists, as well as permed and straightened hair.

Wigs are quick and easy for characters such as Karen (played by Wu-Tang: An American Saga‘s Ebony Obsidian), who has worn the occasional, less-than-convincing lace-front. Yet while Karen’s wigs have improved over the years, viewers have taken note of the hairpieces that didn’t get much better, such as the Caesar cut that private detective Leslie Davenport (Keena Ferguson) donned. 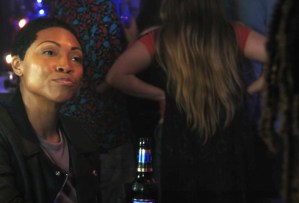 “I want all of y’all to stop talking about hair to me, please,” a slightly annoyed Perry recently said on The Tyler Perry Show: Sistas After-Show Edition. “I swear to you, these are the things I can do: I can run a company, I can build a house, I can go on stage. I do all of this stuff. I know what I do. I don’t know how to do hair. I don’t know nothing about it.”

Perry argued that he employs professional hairdressers to worry about the wigs and styling used on Sistas (and his other TV shows and movies).

“I hire people to do hair. Pay them $65 an hour,” he said. “You heard that right. $65 an hour. They work 10 to 12 hours a day to make sure the hair is right. That’s their job, so I’m paying them to do their job and they’re doing that. They’re doing a great job. Sometimes, things slip because I move a little fast, but they get it done.”

After explaining his side of things, Perry had one request for tweeters who hate the wigs on Sistas: “Stop asking me about some damn hair,” he added with a laugh. “Go talk to somebody that’s got a hot curler. Like I’m walking around with a damn hot curler.” 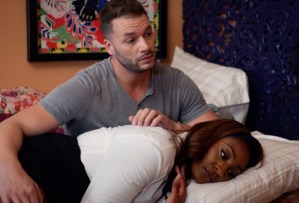 Perry is willing to admit some faults — and was a lot less defensive — when another viewer tweeted about the unfortunate twin mattresses some of the characters have in their homes. To that, he self-deprecatingly conceded, “You right.”

What do you think of the wigs on Tyler Perry’s Sistas? Drop your thoughts in the comments.