We were already creeped out by Alma last week, and that was before she became a ravenous bloodsucker with a god complex.

Double Feature: Your Guide to Who's Who in Part 1

As we move into Episode 3 of American Horror Story: Double Feature, we’re basically watching a new show, one about a father teaching his daughter how and when to properly drink blood without getting caught. It’s kind of like The Vampire Diaries, only they’re allowed to drop F-bombs.

After a close call with Chief Burleson, who comes by the house to inquire about complaints that Harry’s daughter was spotted walking the streets of P-Town covered in blood, the shoe-in for Father of the Year decides to take a more active role in Alma’s life. And by that, I mean he makes her promise not to kill and/or eat anyone without his permission. Boundaries!

But let’s not pretend that all is well with Alma just because she’s agreed (for now) to leave the killing to her dad. She still says plenty of unsettling crap, including that she considers her own life more valuable than others’. (“Everybody else could just disappear one day, and it wouldn’t matter.”) That apparently extends to poor hospitalized Doris, whom Alma suggests they ditch completely. (“She’s not a great mom or a great wife. And her designing stuff is kind of lame.” Read. For. Filth.)

For Alma’s first official meal, Harry targets a junkie who’s selling some crap on Craigslist, but the joke’s on him when said junkie’s boyfriend knocks him out from behind. Apparently these sick freaks like to kidnap men, rape them and murder them. And because your average snuff films don’t cut it anymore, she explains that her boyfriend is going to give Harry a “rosebud.” (If you know, you know. And if you don’t, trust me, you don’t want to Google it.) Fortunately — or not, depending on which murderer you’re rooting for in this scenario — Harry gets the upper hand, killing them both for Alma’s supper. 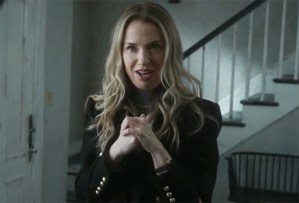 Surprise No. 2 arrives in the form of Harry’s agent Ursula, who comes all the way to P-Town to tell him that Quentin Tarantino wants him to write his new Hulu limited series. She even quotes Tarantino as saying “That motherf–er is a better writer than I am!” But something tells us he just recognizes Harry as a fellow pill popper. Ursula then pays a visit to Belle and Austin’s favorite piano bar, though she’s not exactly the biggest fan of their music. (“If I wanted to listen to a s–ty Captain and Tennille cover band, I would have just killed myself, because I’m sure that’s what’s playing on an infinite loop in hell!”) They, in turn, aren’t the biggest fans of Ursula, with Belle all but promising to gobble her up before season’s end.

Ursula also gets to know Mickey, who first tries to pick her up before forcing his screenplays on her. She reluctantly agrees to read them, only to find herself blown away by their inexplicable brilliance. But Ursula’s a smart cookie, and she quickly deduces that there must be something in the P-Town water supply, a suspicion Mickey confirms by telling her everything about the pills.

Mickey even takes Ursula to meet the Chemist, whom she offers a butt-load of money (“plus backend!”) for a steady supply of those little black miracles. But the Chemist doesn’t feel like playing Let’s Make a Deal, so she turns to Belle and Austin, demanding that they kill everyone who’s been causing trouble as of late. For the record, that includes Ursula, Mickey and Harry — plus Alma and Doris, you know, just to tie up any loose ends.

There is indeed a major murder by the end of Episode 3, but it isn’t any of the names on Belle and Austin’s hit list. A suspicious Chief Burleson drops by the Gardener residence while Harry is off visiting Doris in the hospital, and she has a lot of questions for P-Town’s newest li’l bloodsucker. But before Burleson has a chance to figure anything out, Alma stabs her in the neck and lets her bleed out on the living room floor. Poor Ursula had no idea what she was in for when she agreed to babysit Alma, but their literal post mortem chat will have to be saved for next week.

* I know this was the first full episode we got to spend with her, but I feel like Ursula is already shaping up to be Leslie Grossman’s best Horror Story character yet. She’s so sharp in this role, and some of that dialogue was simply delicious. I would let her belittle me any day, and I would thank her for doing so.

* Speaking of dialogue, I’m still enjoying the running gag of different characters asking Harry if he’s written “anything I would have seen” when they find out he’s a writer. Even if they’re literally about film themselves raping and murdering him, apparently.

* Have we settled on a name for the untalented creatures that roam P-Town? Because after hearing Denis O’Hare’s character refer to them as “those pale strange homeless creatures wearing the AIDS-era couture,” I’m thinking we can just settle on that.

Your thoughts on AHS: Double Feature Episode 3? Drop ’em in a comment below.