This week on DC’s Stargirl, Pat and Barbara entertained unexpected houseguests, The Shade shed light on things, and Cindy got to recruiting her sinister crew.

PARENT TRAPPED | Following a cold open in which we got a sense of Artemis’ visits with her imprisoned parents, we and Mike discovered that Crusher and Paula had broken out of the hoosegow — not to make any mayhem, but to be on hand for their daughter’s football tryout in front of a Big 10 scout. To that end, they leaned on Pat and Barbara to let them lay low at the Whitmore-Dugan house, or else risk Pat’s Stripesy secret getting out. There was much humor to be mined from the oil and water mix of regular vs. health nut parents (and Barbara being flabbergasted by Pat having over her would-be killer!), but eventually Barbara and Paula came to realize they have something in common — headstrong teen daughters.

Pat sneaked the Crocks over to the football field, and once Artemis saw that her folks were on hand, she really shined as a QB. That is, until Cindy arrived on the scene and used Eclipso to trick Artemis into thinking that SWAT agents were surrounding her parents, closing in for a kill. Artemis sprinted off the gridiron and tackled one SWAT officer, only to realize it was actually Courtney. Afterward, Artemis briefly reunited with her parents, who ‘fessed up that they were guilty of their crimes. Oh, and the college scout called Artemis to say he was sacking her prospects, after witnessing her violent outburst. 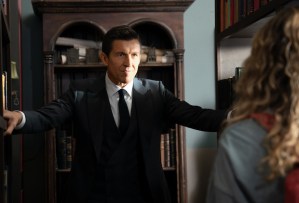 THE SHADOW KNOWS | After she and Beth gave Yolanda and Rick a crash course on the Black Diamond — it hails from a mysterious Diabo Island — Courtney headed over to a rare books store to dig up more on the explorer who was the only person to leave said isle alive. There, she bumped into The Shade, who scoffed at the suggestion he was angling for a mere “supervillain team-up” with Eclipso. The Shade explained the difference between “bad and evil,” saying that while the odd life has been lost at his hands, no one he ever attacked didn’t have it coming. He also dropped on the lass the bombshell that Eclipso years ago killed Dr. McNider’s daughter, who was but 10 years old. The Shade thus assured Court that his plan is to find the Black Diamond and bury it in the deepest part of the ocean, so that Eclipso can never harm anyone again. 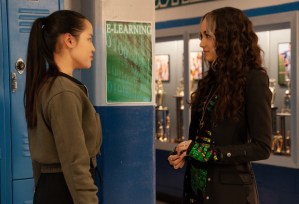 ELSEWHERE… | Before targeting Artemis on the football field, Cindy chatted up Isaac, bonding in a dark-ish way over their murdered parents. And while hanging at the old ISA HQ, Eclipso taunted Cindy with visions of her mother, before tantalizing her with a glimpse at what her own Injustice Unlimited team might look like, with Cameron, Artemis, Isaac and Mike at her side…. Though Pat begrudgingly confirmed for Courtney what she had learned about Dr. McNider’s daughter, it seems that he and Barbara are still withholding something else about Eclipso’s darrrrrk past with the OG JSA…  After trying/failing to arrange a Putt-Putt date for her parents, Beth heard back again from “Chuck” — though the voice on the other end revealed that he wasn’t any “A.I.” but the actual Charles McNider, before uttering things about losing contact with the JSA, and blaming The Shade. We then got a peek of steampunk Charles wandering along some scary, shadowy plain….

What did you think of “Summer School: Chapter Four”?