In Hulu’s true-crime comedy Only Murders in the Building, amateur sleuths Charles (Steve Martin), Oliver (Martin Short) and Mabel (Selena Gomez) are well on their way to solving a murder — assuming they don’t trip over a few skeletons along the way.

New on Streaming in September 2021

Wednesday’s premiere is very selective in what it chooses to reveal about this unlikely trio — and each of them is very selective in what they choose to reveal about themselves. Charles, for instance, is a washed-up TV star who spends part of each day making, and subsequently discarding, a perfectly good omelette — but why? And Oliver, a failed musical director, has a pile of debt from which he cannot dig himself out. As for Mabel, all we know is that she is renovating her aunt’s apartment. Oh, and one of her closest friends is the murder victim! But more on that in a bit…

Wednesday’s premiere, titled “True Crime,” begins in the near future, as a SWAT team swarms The Arconia, a pre-war apartment complex on New York City’s Upper West Side. The residents are asked to stay in their flats, but Charles and Oliver flee. They run down the stairs in something of a panic, then into an unlit apartment where Mabel is covered in blood and kneeling before a dead body. “It’s not what you think,” she tells them — but what are they supposed to think?

Two months earlier, Charles, Oliver and Mabel have not yet been properly acquainted, but find themselves in the elevator at the same time. A dapper young man with the last name Kono enters whilst talking on his phone. He’s visibly upset. He asks the person on the other end of the line about a misplaced package, then exits the elevator, at which point we notice he’s carrying a garbage bag with him. (Again, why?) Charles, Oliver and Mabel proceed to their respective apartments to listen to the latest episode of their favorite podcast All Is Not OK in Oklahoma, narrated by Cinda Canning (Tina Fey). But right before the episode gets good, the building’s fire alarm goes off and forces them to hit pause, in order to evacuate. (On his way downstairs, Charles notices a hooded individual who makes their way upstairs, but we don’t get a good look at him or her.) 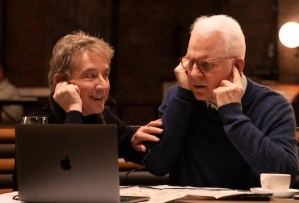 Soon after, Charles, Oliver and Mabel find themselves at the same nearby restaurant, where they share a booth and bond over All Is Not OK. Then upon their return to The Arconia, the doorman informs them that a tenant offed themselves on the ninth floor, and no one is allowed back in until the authorities give him the all-clear. But rather than wait, the trio sneaks upstairs for a peek at the crime scene, where they discover that the man who allegedly killed himself is Kono.

Charles, Oliver and Mabel suspect foul play, but the detective who confronts them maintains that this was a textbook suicide. The man even left a note on his laptop, she says. But Charles and Mabel can’t bring themselves to let it go — and both of them wonder why this neighbor entered the elevator with a garbage bag when there’s a garbage chute on every floor. Along with Oliver, they head down to the basement to rummage through the trash. Oliver, meanwhile, is already suggesting they use this presumed murder as the focus of their very own true-crime podcast. As he and Charles discuss this would-be podcast, Mabel stumbles upon Kono’s trash, which contains several hand-written notes. (One of them reads, “If there’s anyone left to care, there is nothing for me anymore.” Another reads, “I am just tired of feeling lonely. I don’t want to be lonely anymore.”) Were these early drafts of a suicide note? That same garbage bag contains mail, all addressed to a Tim Kono. Now we have his first name!

Another day goes by, and Charles and Mabel still can’t leave well enough alone. In the hall, Mabel tells Charles that she saw Tim a week ago. He was talking with building head Bunny, and he was asking her about a package of his that she received by accident. This was clearly a recurring issue for Tim, since he was also looking to retrieve a misplaced package while he was in the elevator. Charles and Mabel put two and two together and deduce that Bunny is still in possession of Tim’s most recent package, then break into her apartment to intercept it. As Charles picks Bunny’s lock, he and Mabel get to know each other better. Charles tells her that he has lived alone for 28 years (his father treated his mother like crap, and he feared that history was bound to repeat itself if he met someone), while Mabel tells him that she and her friends used to refer to themselves as the Hardy Boys and solve make-believe crimes in the apartment complex they once occupied. 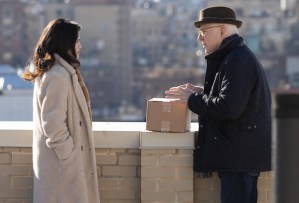 After Charles and Mabel intercept the package from Bunny’s apartment, they head up to the roof to see what’s inside. It’s a rather extravagant ring — perhaps it’s an engagement ring, or maybe a family heirloom? — which sends their investigation in a whole new direction. Charles texts Oliver to let him know that they’ve made a breakthrough, then the trio convenes and comes up with a name for their podcast: Only Murders in the Building.

Later on, Charles is stopped in the hall by another neighbor (played by 30 Rock‘s Maulik Pancholy). He acknowledges the smell of omelettes coming from Charles’ apartment on a daily basis, and says the scent reminds him of a woman named Lucy. “Have you heard from her?” he asks. “Here and there,” Charles answers. (But who is Lucy?) Mabel, meanwhile, is back in her own apartment. As she takes a shower, we follow the camera out of the bathroom and into her bedroom, where her open laptop displays a photo of her and the aforementioned Hardy Boys — including murder victim Tim!

What did you think of Only Murders in the Building‘s premiere? And will you keep watching? Weigh in via the following polls, then drop a comment with your full review.