Jeremy Renner and Kyle Chandler are brothers, fixers and mayyyybe gangsters in the first trailer for Mayor of Kingstown, Paramount+‘s new drama from Yellowstone co-creator Taylor Sheridan and Hugh Dillon.

Set to debut Sunday, Nov. 14, Mayor of Kingstown follows the McLusky family – power brokers in Kingstown, Mich., where the business of incarceration is the only thriving industry. Tackling themes of systemic racism, corruption and inequality, the series promises to provide a stark look at the McLuskys’ attempt to bring order and justice to a town that has neither.

Renner stars as Mike McLusky aka “The Mayor of Kingstown,” while Chandler plays his older brother Mitch, who is a fixer both inside and outside the town’s lifeblood prison system. Dianne Wiest (as McLusky matriarch Mariam), Taylor Handley (as youngest brother Kyle), Emma Laird and Tobi Bamtefa also star. 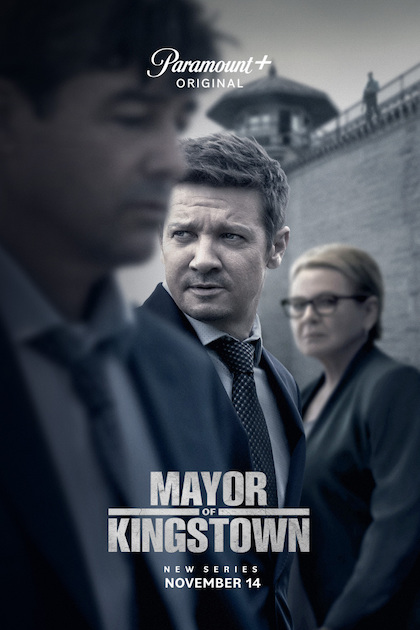 The cast includes Aidan Gillen (Game of Thrones) as Milo Sunter, a leader of the Russian mob currently serving a life sentence in Kingstown’s supermax prison, and Hamish Allan-Headley (Cyrus and Chels) as SWAT captain Robert, while the recurring players include Nichole Galicia (Defiance) as Rebecca, Mike’s fiercely loyal assistant, Andrew Howard (Watchmen) as Duke, a key member of the Aryans and a former inmate, and Mandela Van Peebles as Sam, a young prison guard who is in over his head.