So it was a red herring!

Friday’s Ted Lasso puts an end to the mystery surrounding Rebecca’s Bantr match, revealing that her secret admirer is not Coach Lasso (as we had come to expect following a certain scene in Episode 5), but instead rising AFC Richmond star Sam Obisanya. (Hmm… how is Rebecca’s goddaughter going to react?)

The big twist comes in Episode 6, as Rebecca continues to exchange messages with LDN152 while also hooking up with a hunky lad named Luka. At the end of a particularly stressful day for the team owner, which culminates in the discovery that her mum has once again reneged on her decision to leave her ungrateful dad, Rebecca phones Luka for a late-night booty call. Once she puts her phone down, a Bantr push alert appears on her screen with a new message from LDN152: 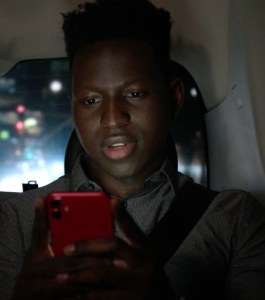 “Crazy day at work today, but I couldn’t stop thinking about you,” it reads. “Maybe we should meet…”

Before Rebecca has a chance to retrieve her phone and respond, the show reveals the man on the other side of the conversation — and it’s none other than Sam.

Ted, meanwhile, suffers another massive panic attack in this episode. It occurs midway through an extremely important match for Richmond. In fact, this one is so severe that he makes a beeline for Sharon’s office, where he waits for her to return in order to make the appointment he’s so desperately tried to avoid before now. It’s likely that an earlier call from Henry’s school triggered this latest bout of anxiety, but it’s hard to believe that that’s all that’s bothering this incessantly optimistic man.

What did you think of Ted Lasso Season 2, Episode 6: “Signal”? And what do you suspect will happen once Rebecca discovers that Sam is LDN152?