Not many actors can say they’ve gotten the unique opportunity that Matt Ryan did after his NBC drama Constantine was cancelled in 2015. The character went on to get an unexpected second lease on life in The CW’s Arrowverse, where Ryan eventually became a regular cast member on Legends of Tomorrow.

But very soon, Constantine’s time on the series will come to an end: Ryan is set to return next season as a new character, Dr. Gwyn Davies, an eccentric scientist from the early 20th century who might be the team’s only hope, it was announced during Comic-Con @ Home 2021.

Below, Ryan reflects on his many years as John Constantine and what drove the decision to say goodbye to the master of the dark arts. The actor also teases his character’s ending and reveals the one thing he won’t miss about playing the role. 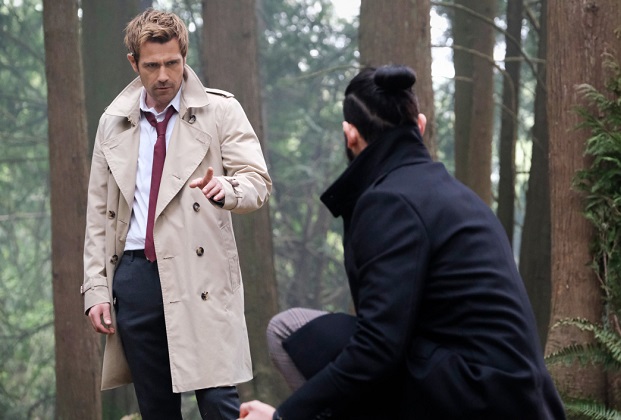 TVLINE | This season has been building up to Constantine’s dark turn for a while, and now it’s here, John’s teaming up with Bishop. What can you preview about how that will play out in this Sunday’s penultimate episode [airing at 8/7c]?
Earlier in the season, we saw John like we’ve never seen him before. He’s fallen in love, he’s getting in touch with his good side, he’s trying to better himself as a person. These are all character traits which are not normally synonymous with John Constantine. I can imagine that that’s been quite frustrating for the audience. It was frustrating for me at the time until I knew where the storyline was going, and then obviously the payoff was John getting back to his old nasty way. Now that John is back in this sphere, you can expect John Constantine s—t to happen. Because he’s killed the empathetic part of himself, the question that I had was, “Does that blind him in a way? Without that bit of empathy, does that affect John’s judgment in any way, in terms of the way he operates with people?” I would say John and Bishop together, they’re both nasty pieces of work, so there’s going to be some trouble.

TVLINE | The big news out of Comic-Con was that you will be playing a new character next season instead of Constantine. Take me back to the conversations that you had with the producers about that transition. What prompted the change?
When it first came about, it just felt like it was right for John to leave Legends. John Constantine is someone who always walks alone, even though in the comics, he becomes the leader of the Justice League Dark and he pops up in various different comics. Ultimately, he’s a loner with his guilt and torment that walks this earth alone. There was only so much that we could ever do with him on Legends. It almost felt like we were on borrowed time at some point, because you don’t want to push a character like this too far into a show and take him away from his roots too much. So it felt right, to be honest with you, that this was the right time for him to leave the show, and for me to move on to something else and find a new challenge as well.

When they offered up the opportunity to come back as a completely different character, the challenges of that [were] so different from the challenges I knew with John. I just couldn’t say no, really. I was so excited about engaging with this show and the style of this show in a way that I couldn’t with John, because there was a part of me that was always trying to keep John in line with the DNA of his character that was originally from the Hellblazer comics… The wonderful thing about me coming back onto this show with Davis is there’s a mystery there, which we don’t quite have with John, because everybody knows him so well. And also, in terms of the style of the show, I wouldn’t want to use the word “shackled” because I didn’t feel shackled by John, I absolutely adore the character, and he taught me so much, but I felt that I had an obligation to him and the fans of the original Hellblazer to at least try, within the context of the show, to be somewhat true [to the comics character]. 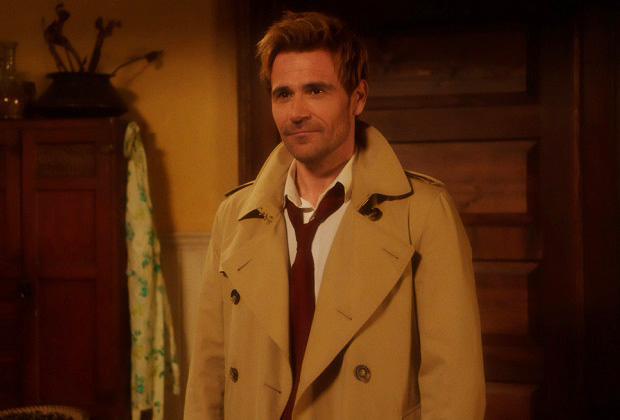 TVLINE | How far in advance did you know that this was going to be happening?
Before I started shooting this season. It was last season that we knew it was going to happen. So we had the conversation, and it was like, “Oh, OK.” When the original Constantine show was cancelled, it felt like there was unfinished business. It felt like, “I wish that I could get to play out this character in a way that I didn’t get to do.” Who would have thunk that seven years later, I’d still be playing the character, getting to explore? So I really had the most wonderful journey with him, and I felt like in the context of this show, it was the right time for him to go on his journey and walk his path. And as a fan, which I am — I’ve read almost all the Hellblazers, I think, apart from the last two of the new run, which are effing awesome, by the way — it just felt like it was the right time for him to leave the show. And then they asked me to stay. It’s a different challenge for me as an actor, and that felt organic as well.

TVLINE | As you said, this is a very unique situation, where you got to play this character over several seasons on various shows and various networks. Given your connection and time with the character, what kind of an ending did you want to give him?
The most important thing for me was for him to go out in a way that’s very John Constantine, for him to get back somewhat to his roots… Everybody was so up for that. I thought they did such an amazing job with Episode 13, which felt like I was shooting a movie because of the way we shot it, and the boldness of the writers and the directors and the studio [in] making it so bloody and graphic was really, really great. I feel like the sendoff that they’ve given the character is great, obviously, within the context of the show. I just didn’t want him to have a happy ending. Don’t give John Constantine a happy ending! No, he’s got to f—k it up!

TVLINE | You’ve spent so much time with John. Is there something that you’re going to be happy to say goodbye to, maybe something that got uncomfortable or repetitive?
Yeah, dying my hair blond all the time! The one thing I’m happy about. But also, that comes with a juxtaposition. For the last however many years I’ve been playing him, I’ve not had to have costume fittings, because I’ve always got the same costume. So this season that we’re shooting now, I’ve been in costume more times than I have for the whole seven years that I played John Constantine. So I’m really glad that I don’t have to dye my hair, but now I’m getting really affiliated with having costume fittings. There’s lots of stuff about John which is wonderful and that I’ll take with me. There’s some darkness there, as well, which is good to leave behind.