Finally, after two and a half years off the air, The Other Two is back for Season 2… and Cary and Brooke’s Hollywood dreams are just a tiny bit closer.

Thursday’s premiere (it’s now on HBO Max, remember) finds little bro Chase Dreams putting his teen idol career on hold to go to college at NYU — they still say he’s 13, but he’s grown up a lot since Season 1! — and mom Pat hitting it big as a daytime talk show host. Cary and Brooke are riding Chase’s fame coattails to new heights: Cary is an on-camera host for a wide variety of outlets, from Age Net Worth Feet (yes, he asks celebrities about those three top search engine terms) to Bagel Bites TV, while Brooke is hustling as a music manager and searching for the next Chase. That involves her sitting at a Starbucks and scrolling through kid singers on TikTok, apparently. This is success, we guess…? 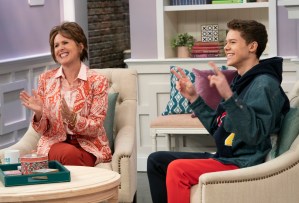 Pat’s talk show is a sensation, and she checks in with Cary and Brooke during every show via FaceTime. She even offers to let Brooke co-manage her along with Streeter, but Brooke turns her down flat: “My brand is not lame daytime, it’s cool music!” She’s reduced, though, to lurking around indoor playgrounds, where she accidentally runs into an old friend having a birthday party for her kid. (She almost Googles “young boy hot how find now,” which is just a bad idea in general.) Cary is also running himself ragged hosting for all these different shows, wearing a new dress shirt for each shoot and then promptly returning them to the store. He does have a new man in his life, though: Jess (played by Devious Maids alum Gideon Glick), who might officially be his boyfriend. Hey, it’s a step up from lusting after his sorta straight shirtless roommate! 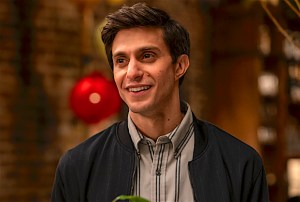 They all meet up at the opening of Blake Lively’s new restaurant: an Asian fusion concept that the waitress assures them “isn’t racist.” Jess meets Pat and Streeter for the first time, and Pat goes over her lengthy daily routine, including five and a half hours of makeup “technically applied by a carpenter.” Plus, Brooke’s dopey ex Lance shows up, and she doesn’t want him there — but that’s just because she misses him. She also reluctantly agrees to be her mom’s co-manager, since Chase is away at college. But he’s not… he’s back! He claims he dropped out because singing is “more lit” than school, but his siblings soon discover he was getting mercilessly mocked by his fellow NYU students. Cary and Brooke give him a pep talk — even though they just got done saying he can’t sing worth a damn — and Chase makes Brooke his co-manager, too. Oh, and Pat and Streeter have a thing going, we think? Welcome back, The Other Two… we missed you.

Give The Other Two‘s season premiere a grade in our poll, and then hit the comments to share your thoughts.