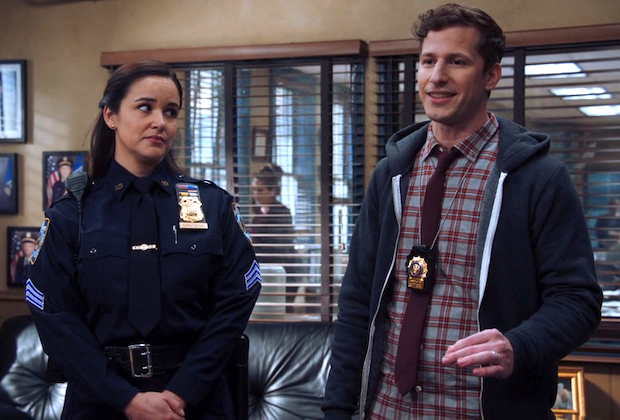 Brooklyn Nine-Nine‘s final season marked the halfway point on Thursday with one last appearance by Craig Robinson’s beloved alter ego, Doug Judy. And he also brought along his sister, Trudy Judy! So how did the NBC comedy wrap up the Pontiac Bandit saga?

Once again, Doug Judy used his friendship with Jake to his advantage, this time in an attempt to evade a five-year prison sentence for grand theft auto. And once again, Jake was naive enough to think that Doug wouldn’t try anything, on account of their friendship. But what set this apart from the previous Pontiac Bandit episodes was Jake’s action at the time of Doug’s final arrest — one with serious repercussions if anyone in the NYPD ever figures out what he’s done. It’s not something I expect the sitcom to explore — and I may come to eat my words, having not seen beyond Episode 5 by the time this recap goes up — but it’s certainly worth discussing.

This time around, Jake had agreed to escort the PB to his J to state prison… without backup. Naturally, Charles was suspicious. He feared Jake had been seduced by Doug’s wiles, and he wasn’t wrong. Jake was convinced Doug was a changed man. But no one sexy ass surprise — and there were multiple sexy ass surprises! — was going to deter Doug from his mission: He was going to manipulate Jake until he didn’t know who he could trust, or who to hand him off to. Jake would drive directly into a trap, where Doug would reunite with Trudy and go on the lam.

In order to ensure that his plan went off without a hitch, Doug needed more man power and instructed Trudy to reassemble his old crew. But those guys fled once Doug went legit, and Trudy was forced to hire crooks off Craigslist to fill their shoes. One of them — Vince Michael Thompson, who ignored Doug’s advice and disclosed his name in front of the fuzz — was determined to put a bullet in Jake’s head and bury him, which Doug refused to let happen. He created a distraction, then issued a karate chop to Vince Michael Thompson’s neck, at which point Vince Michael Thompson dropped his gun and Jake grabbed it. Trudy had already fled the scene by this point, ditching her brother before backup arrived to drag him away.

Before Jake handed Doug off to the arresting officer, he gave his friend a hug… and slipped his pen into the thief’s pocket, knowing full well that Doug could use that pen to “mindfreak” his way out of his cuffs. Two weeks later, Jake received a call from Doug, who had used that pen to “mindfreak” himself not only out of his cuffs, but out of prison. In that time, he and his wife fled to Amsterdam, where they’d presumably live happily ever after. So what do we think about this? Did Jake do the right thing, letting the Pontiac Bandit go free? Hit the comments with your reactions to “PB&J” — as well as any thoughts you might have about Thursday’s second episode.