Fans of Tyler Perry’s Sistas who have been riding for Zac and Fatima’s romance got rewarded during the BET drama’s Season 3 midseason finale. That’s when Zac coined the phrase “Zatima” and pledged his love to the woman who has had his back the most.

“My whole life, I ain’t never had nobody speak power into me,” Zac told Fatima in last week’s finale. “A woman with confidence, who can give men confidence.”

Sistas is the No. 1 scripted series on cable for African Americans 18-49, and its midseason finale was the highest-rated installment of Season 3, according to BET. Combined with The Tyler Perry Show: Sistas After-Show Edition, the finale pulled in 2.6 million viewers. More than likely, this very audience was rooting against Gary and cheering for Zatima.

Devale Ellis, who plays Zac, said viewers should root for the couple. The actor expressed this while recently meeting up with Sistas fans on Instagram Live to thank them for supporting #TeamZatima with costar Crystal Hayslett (Fatima) by his side. As Ellis explained, Fatima is the antithesis of Zac’s mother, with whom he has a toxic relationship, and this makes Zac love Fatima all the more.

“Fatima tells Zac, ‘You can do it!’ That’s the main difference,” Ellis added when comparing the two characters. “They both were hurt, but the way Karen was dealing with her hurt, when it came to Zac, was very angry and disrespectful to him at times. They lost respect for each other.” 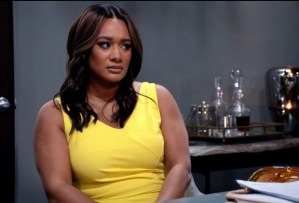 Hayslett said the back-and-forth between Fatima and Zac in Season 3 was inevitable because Zac made it hard to trust him. But now that he has cut ties with Karen and expressed his true feelings to Fatima, there is hope for them when Sistas Season 3B returns — which, TVLine has learned exclusively, will happen on Wednesday, Oct. 13 at 9/8c.

“Fatima has been through some things,” Hayslett said. “I know you’re not supposed to bring that into new relationships. When the person you’re with does things to trigger certain feelings, it took Fatima back. But I love where we’re going.”

Despite the ups and downs for Zatima, Ellis and Hayslett added that they’re both pleased with the storyline for the lovebirds and, just like fans, can’t wait to see what happens next. Perry, who spoke about Zatima during the Sistas After-Show, said Zac needed a win on the series, and so did the couple. That’s why Zac’s financial come-up means so much.

Zac had to be victorious for “every man who has had hard times, who has struggled, who has tried to make it, but never was able to quite get there,” Perry told fans. “I know Black women have it hard. Trust me. God knows I get it. But I don’t want to discount the struggle and difficulties of the Black man, either. It takes the both of us pulling together to change this entire situation.”