An on-set performance by Star Wars vet Mark Hamill — helped along by all kinds of digital trickery — brought Luke Skywalker into The Mandalorian‘s orbit, for the Disney+ series’ crowd-pleasing Season 2 finale.

As extensively detailed by a special installment of Disney Gallery: Star Wars: The Mandalorian (released Wednesday morning; watch it here), a 60something Hamill actually donned Luke’s cloak, picked up a prop lightsaber and made his way toward “Baby Yoda” (aka Grogu). After performing those scenes of a 30something, post-Return of the Jedi Luke, Hamill then sat in a contraption dubbed “The Egg,” which captured HD video of just his face reciting the dialogue, from assorted angles and with varying lighting. 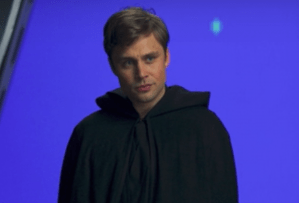 That film and data was then used to create and map Hamill’s performance, but with younger Luke’s face, onto picture double/stuntman Matt Rugetti — who due to secrecy reasons could not be hired via a traditional casting call.

To feature a younger Luke in the Season 2 finale, Mandalorian EP Jon Favreau explains in the special, “We really looked at all the techniques available” — including a completely computer-generated version (a la Grand Moff Tarkin in Rogue One) and a “de-aging” process he described as akin to “an airbrush artist painting out wrinkles.”

Instead, a version of “deep fake” technology was employed, using archival footage of Hamill from the Star Wars movies and assorted BTS interviews to create a vast library of expressions and lighting scenarios. The rendered, 30something Luke was then applied atop Rugetti’s face, all the while informed by Hamill’s actual performance (which, by the way, was not opposite any of the other non-Grogu cast members). 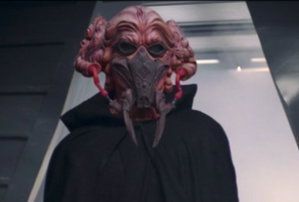 As noted above and throughout the special, top secrecy was needed to keep the Luke reveal a surprise, so in scripts and in conversations on-set — even among those who knew the real deal — the name of Plo Koon, a canonical Jedi, was used. (Digital renderings were even created to propagate the ruse; see photo.) That way, on the off chance the script leaked, fans would nod in acceptance that Mandalorian EP Dave Filoni had chosen to introduce one of his favorite Clone Wars characters into the live-action Disney+ series.

But again, watch the new episode of Disney Gallery: Star Wars: The Mandalorian for many, many more fascinating details.