Ryan Murphy kept us all up way past our bedtimes on Wednesday with the two-part premiere of American Horror Story: Double Feature. But was it worth the extra shot of espresso we’ll all need to function in the morning?

Double Feature Characters: Your Guide to Who's Who in Part 1 'Red Tide'

Hell yeah, it was! Chilling, compelling and wonderfully acted, Double Feature already feels like a return to form for the long-running franchise. It’s also the breath of fresh air we so desperately needed after enduring an entire season of American Horror Stories.

The ludicrously long-awaited premiere introduces us to Harry Gardener (Finn Wittrock), a struggling screenwriter who moves with his pregnant wife Doris (Lily Rabe) and young daughter Alma (Ryan Kiera Armstrong) to Provincetown, Mass., hoping that the change of scene will cure his writer’s block. Despite Harry and Doris’ sunny dispositions, there’s a thick sense of foreboding in the air — and not just because Alma’s favorite car game involves quietly counting roadkill. “It’s weird how it’s more sad when a cat gets run over than when a raccoon does,” she says, which isn’t something you ever want to hear from a child.

Here’s another thing you never want to hear from a child: “It looks haunted.” That’s Alma’s official — and likely accurate — review of the family’s new home for the next three months. And she may be very well onto something, as Harry is soon thereafter assaulted by a colorful local named “Tuberculosis Karen” (Sarah Paulson). “Get the f–k out of here, f–ker!” Karen shrieks at Harry. “Get out of this town! They’re gonna munch on your balls!” I’d say it’s the most disturbing grocery store moment in AHS history, but that wouldn’t be fair to Cult‘s horny clown posse. Never forget.

Adding to her creep factor, Alma also happens to be a viola prodigy, though her eerie playing proves too distracting for Harry. Doris offers to take Alma for a walk through town, but the girls’ day out goes down in flames when a pale, bald freak chases them home and tries to break into the house. A way-too-chill Chief Burleson (Adina Porter) simply chalks it up to a classic opioid-induced fit, telling the family, “I’m really sorry he scared you. You have my word, you’re safe here,” which feels like a lie. Because it is.

Lo and behold, more of those pale, bald freaks turn up outside Alma’s bedroom in the middle of the night. And although they disappear when Harry looks out the window, he later discovers their mangled corpses strewn along the beach during a morning run. (See, this is why I don’t jog!) 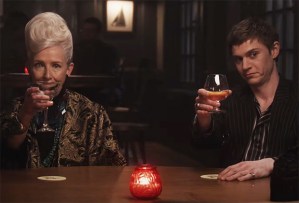 In light of this grim discovery, Harry decides to “celebrate life” by taking Doris out to the only restaurant in town. Unfortunately, life — more specifically Doris’ pregnancy — has other plans, so she stays home to nurse her upset stomach while he paints the town red by himself. Well, not entirely by himself. He encounters a trio of colorful characters at the restaurant, beginning with a prostitute named Mickey (Macaulay Culkin) who doesn’t mince words when he solicits Harry for a bit of ween-on-ween action. He also comes across Austin Sommers (Evan Peters) and Sarah Cunningham (Frances Conroy), a pair of eccentric writers and karaoke enthusiasts. That performance of “Islands in the Stream”? Perfection.

Sensing a kindred spirit, Austin and Sarah — excuse me, “Belle Noir” — invite Harry to their table, where they promise that his writer’s block won’t last for long. There’s an unsettling undertone to their conversation, but the tension is quickly severed by the arrival of good ol’ Karen, who’s looking for some scraps. “I just want the gristle and fat, bitch!” she declares. At this point, I’m officially in love with her.

Riding high from meeting such accomplished writers, Harry returns home… where he’s attacked by another pale, bald freak. (Seriously, I can’t wait until we know exactly what to call these things. “Pale, bald freaks” really doesn’t do them justice, though it’s still better than Harry calling them “lunatic mimes with razor teeth.”) But the modesty that Harry previously displayed appears to melt away, as he bludgeons the friggin’ guy to death on the floor of his sunroom.

Meanwhile, far creepier things are happening across town, and I’m not just talking about Belle paying Mickey $300 to let her drink his blood. No, I’m talking about Karen reluctantly bringing Belle a kidnapped baby in exchange for drugs and protection from “the others.” Speaking of drugs, Austin offers Harry a baggie of “tragic, magic little black pills” that allegedly inspire him and Belle to craft their best work. Harry turns them down at first, but he changes his mind after a dishearteningly straight-forward chat with his agent Ursula (Leslie Grossman).

Inspiration (aka the pill) strikes Harry in the second half of the premiere, effectively pumping the brakes on the family’s plan to get the hell out of P-Town. We also see the first negative side effect of the pill when Harry blows up at Alma for inquiring about his drug use. “Don’t be jealous because I have inspiration and you can’t play f–king Paganini!” he says. Doris sees this outburst as even more of a reason to leave town, but Harry reminds her that she’s also being paid to redecorate this house — and if she backs out, it could be detrimental to her budding career as an interior designer. Fair enough. 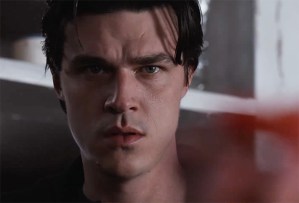 That’s when the side effects really begin to manifest. The transformation starts innocently enough, with Harry being sickened by the taste of a perfectly good turkey sandwich, but before you even have the time to wonder if this season is actually about vampires, Harry is violently sucking the blood out of a small cut Doris’ accrues while cooking dinner.

Harry returns to Austin with questions about his newfound bloodlust, which he’s surprisingly eager to answer. The pill, developed by someone known simply as “the chemist” (Angelica Ross), only works if the person taking it has real talent. If the person is merely a talentless “dreamer,” they’ll become one of those aforementioned pale, bald freaks. There’s a minor caveat, however: The pill depletes the body of its most important minerals, and drinking steak juices isn’t enough to replenish them. The whole conversation feels very Little Shop of Horrors (“Must be blood! Must be fresh!”), and Harry isn’t feeling it.

That is, until Ursula calls Harry with the news that “Joaquin f–ing Phoenix!” has agreed to star in his just-written project, which has apparently already gotten a green light from the execs. On top of that, Harry is also offered an overall deal with Netflix. Is any of that how TV works? Of course not. But do I want to read the hell out of this allegedly brilliant script? You bet.

With the taste of success now doing cartwheels on his tongue, Harry knows he’ll need more pills, which means giving into the requisite bloodlust. Fortunately, Belle and Austin are more than happy to take Harry on a murderous joyride, knocking off junkies and draining them faster than you can say, “No, seriously, is this season about vampires or not?!” Harry even pays a visit to dentist-turned-tattoo artist Lark (Billie Lourd), who sets him up with a new set of sharpened chompers. Munch munch, crunch crunch!

But by the end of the second hour, Harry isn’t the only member of the Gardener family with a pill-popping problem. Frustrated by how bad she is at the viola, Alma steals one of her father’s little miracle drugs, instantly turning herself into a more talented, more irritable, more bloodthirsty version of herself. Doris is surprised to discover Alma feasting on a dead animal the next morning, but if I were her, I’d save my shrieks of horror for later in the season. Things can only get worse from here.

Did the first two episodes of AHS: Double Feature live up to your expectations? Which new character is your favorite? (And why is it Karen?) Grade the premiere below, then drop a comment with your full review.