The Girl of Steel might be back in National City, but that doesn’t mean she’s left the Phantom Zone entirely behind.

Supergirl returned Tuesday night with an episode that saw the titular hero struggling to process the trauma she experienced while being trapped in the nightmarish zone.

The episode began with an inconspicuously dressed Brainy sneaking a “Welcome Back, Kara” cake into the Tower for a surprise party for their Kryptonian cohort. Still suffering from nightmares, Kara declared a moratorium on anything involving the word “phantom.” (Sorry, Star Wars: Episode I — The Phantom Menace.)

Kara’s warm welcome consisted of hugs, happy tears and our hero telling Lena Luthor, “It’’ only because you’re on the team that I’m here.” 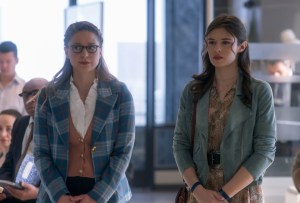 Zor-El, who planned to reunite with his wife Alura in Argo City, decided that he would first spend time with his daughter on Earth. That meant tagging along to CatCo as Kara’s uncle “Archie” from Midvale. Nia covered for Kara in her absence, explaining to Andrea that she’d been off the grid on a special assignment from Cat Grant. It wasn’t a foolproof lie, but it seemed to have done the trick. Besides, Andrea was more concerned with CatCo’s declining numbers — they’re now ranked eighth against their competition, and that is unacceptable.

After learning about the Phantom attack on National City while she was away, Kara confronted Nia, who then explained that Alex didn’t want her to worry, which is why she was kept out of the loop. Kara also ran into William, apologizing for disappearing on him and offering to catch up over coffee. However, William started seeing someone new and already made plans.

Not happy with an article detailing CatCo’s decline, Andrea used her Acrata suit to sneak into Luthor Mansion to dig up dirt on Lex. What she found was even better: detailed files on Supergirl, J’onn and Alex.

Elsewhere, Zor-El marveled at his new powers, courtesy of the earth’s sun. A falling satellite provided the perfect opportunity for a father-daughter team-up, and for the Kryptonian scientist to try out his new abilities.

After putting out a dangerous fire on an island made of trash, Zor-El found a correlation between Earth’s dying oceans and Krypton’s decline. Following a visit to the Fortress of Solitude with Kara and a group chat with the Superfriends, Zor-El figured out how to fix the problem: upgrading Kelex, aka Oscar (yes, named after the iconic Sesame Street character), so that he could convert trash into energy that can be absorbed by the robot. The impressive feat was made possible thanks to all the alien technology available on Earth. 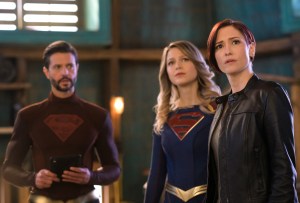 J’onn raised a valid concern about Zor-El’s plan: Not all alien tech works well together, and that can cause major problems. But Zor-El insisted they had no time to waste, and so Oscar went to work on the island of garbage. It seemed to work at first, but then Oscar went off the grid after absorbing massive amounts of energy. He remerged as a giant garbage monster, having absorbed an alien parasite that allowed him to adapt to his environment.

A fierce battle ensued, and Kara was knocked to the ground — her suit weakened by traces of kryptonite embedded within the garbage — and she experienced another PTSD flashback (which she’d been dealing with throughout the hour). After some teamwork to distract the garbage monster, Brainy implanted a virus that defeated it once and for all and returned Kelex to normal. Kara then hurled the remnants of that trash heap into the sun, making us wish we could do this in real life.

Back at CatCo, Andrea decided to shift editorial strategy from exclusive interviews with Supergirl to investigative reporting on the Superfriends. This can’t be good!

With the monster defeated, it was time for Zor-El to make his way to Argo City. During a tearful goodbye with Kara, he reminded his daughter that she doesn’t need to carry the weight of the world on her shoulders all the time, and that sometimes it’s OK to be human. Meanwhile, Lena revealed to Nia that she was headed to her birth home to learn more about her mother.

Kara, finally addressing her trauma with Alex, admitted she was so focused on escaping that she never really processed what she went through in the Phantom Zone. “What if that fear never goes away?” she asked Alex, who revealed her own fears of losing her sister and assured her that they would get through this together.

The episode ended with Nia awakening from a nightmare and uttering a name: Nyxly.

What’d you think of tonight’s Supergirl? Drop your thoughts in a comment below.