This week on DC’s Stargirl, Mike believed he had the “write stuff” to join the JSA, just as the team confronted Richard Swift about his shady agenda.

This week’s cold open flashed back to Christmas Day 2010, where both Pat/Stripesy and Johnny Thunder (played by Ethan Embry) — beholder of Thunderbolt, which is “more powerful than Green Lantern, Flash, all of ’em combined” — had been benched while the rest of the JSA took on the ISA. But before the sidekicks could kick back with some eggnog, Ted Grant/Wildcat arrived to recruit Johnny, but not Pat, for the Big Show.

Back in the present….

Mike is slogging through another run of his paper route, where he apparently gets bullied on the daily by a pack of punks with bully-type nicknames. Upon returning home, Mike gets a phone call about a new subscriber, and when in need of a pen, he unwittingly grabs Thunderbolt from Courtney’s pencil cup. Afterward, while lamenting both his exclusion from the JSA fun and his bullied paperboy fate, Mike mutters, “I wish I could be a superhero” — and we see the pink pen twinkle in his pocket. 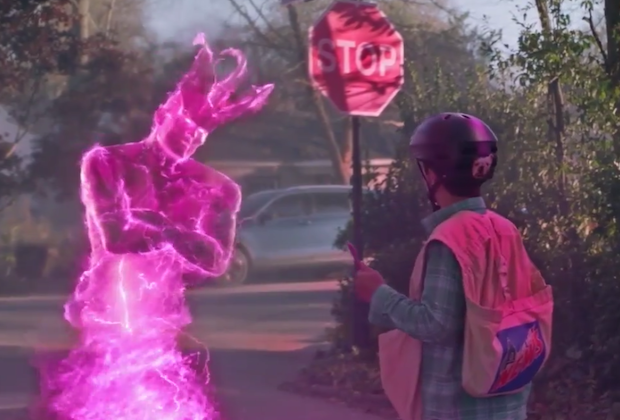 The next day during his paper route, Mike is presented with hint after hint to say the words “So Cool” — and once he finally does, Thunderbolt (voiced by Jim Gaffigan) emerges from the pen and introduces himself as Mike’s “new best friend.” Thunderbolt explains his ties to Johnny Thunder and the OG JSA, and his ability to grant (almost!) any wish. But as with many a Monkey’s Paw-type device, lazily phrased wishes can backfire, as Mike quickly and repeatedly learns. Later, Mike sees his bullies stealing cookies from a local Girl Scout, so he wishes that they would stop — and Thunderbolt rains down STOP sign after STOP sign in the lads’ path, until they scamper away in terror. On their way home from summer school, Courtney and Yolanda happen upon Mike and discover his newly discovered power.

Meanwhile, Barbara is taking inventory of the late William Zarick/The Wizard’s belongings when Richard Swift literally emerges from the shadows, claiming that some assistant directed him to the room, and he figured he could help. Swift soon locks eyes on the box that held the Black Diamond, and when he find it empty, he asks if he can have the box. Barbara declines, and Swift becomes clearly agitated before enshrouding the closet in complete darkness and disappearing.

Over at the Pit Stop, Pat and the JSA learn about Mike now being in control of Thunderbolt, though Pat forbids his son from making further wishes. When Pat asks Mike to summon Thunderbolt, the genie shares with Pat in private that, as with Johnny Thunder and now Mike, he typically is drawn to people who are feeling very, very lonely — a fact that Pat is saddened to hear. With Courtney champing at the bit to stop The Shade in his tracks, it is agreed that Mike will use Thunderbolt to find the ISA alum’s current location, after they spend a great deal of time/a music montage hammering out the prolonged and very specific wish. But sure enough, the efforts pays off, and Thunderbolt points them to Zarick’s vacant house. 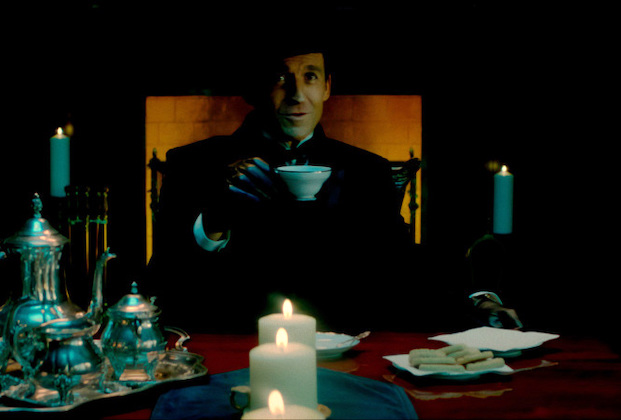 Pat forbids Mike/Thunderbolt from coming along, and instead tasks his son with watching over the Pit Stop. At the Zarick home, the JSA and Pat find Richard Swift/The Shade simply sitting at a dining table, sipping perfectly steeped tea. He invites them to partake, but Pat and Court are intent on finding out what his agenda for Blue Valley is. Swift says it would probably be best if they didn’t know what he is up to, but instead simply “stay out of my way.” A detente seems about to be reached when an impulsive Mike arrives to sic Thunderbolt on The Shade, but the supervillain’s shadowy tendrils easily neutralize the genie as well as pin down everyone in the JSA. After again warning the kids to stay out his way, The Shade vanishes from the house — but at episode’s end he is seen standing atop the clock tower, holding the Black Diamond’s empty box and realizing(/worrying?) that Eclipso is going to “kill those children.”

* After bungling things with The Shade, Mike wishes that Thunderbolt “was in better hands,” at which point the pink pen blinks away, reappearing in the bedroom of Mike’s pal/fellow paperboy Jakeem. (As you might recall, earlier in the episode Mike told his paper route boss that the new subscriber would be in “better hands” with Jakeem.)

* Yolanda shared her concern with Courtney about how they would deal with (kill?)The Shade once he is found. Similarly, she felt out Mike about his feelings about Icicle’s demise — though Mike explained he was simply hauling ass in the truck, and shattering the villain into ice cubes was an accident.

* Beth opened up to Rick about her parents’ looming divorce, after which “Chuck” (or a version thereof) suddenly came back online inside the goggles to frantically warn that they are “in danger,” at the hand of “Eclipso.”

* After Pat relayed what Thunderbolt said about Mike feeling lonely/not involved, Barbara shared her findings that Richard Swift stole a box that had contained a black diamond — which Pat warned represents “something very, very bad.”

What did you think of the episode “Summer School: Chapter 3”?