Sometimes the ones we love can hurt us the most.

In Reservation Dogs‘ fourth episode (now available on FX on Hulu), Bear (D’Pharaoh Woon-A-Tai) eagerly anticipates his ridiculous rapping father’s trip to town, where the musician is set to perform his latest banger “Greasy Frybread” at a local conference. But the relationship between pops Punkin and his son is on shaky ground ever since Dad ran out on Bear and his mom years back. In pure teenage fashion, Bear’s idealization of the man runs wild, and when his excuse factory-of-a-dad fails to show, the boy learns some harsh truths that completely crush his spirit.

Below, Woon-A-Tai talks to TVLine about the teen’s realization that his dad “doesn’t really give a s–t” about him. Plus, the actor discusses how he landed the lead role in the Taika Waititi/Sterlin Harjo series, and teases what may be in store for the characters down the road.

TVLINE | What was your first meeting with Taika and Sterlin like?
WOON-A-TAI | The first time I met them was at the final audition. I had been running through those lines for so long in my head and going over it hundreds of times before I went there. I took a deep breath before I walked in and I did my stuff. What Sterlin told me later was that he took interest in me because I got really physical with them. They had a camera — you know in the pilot when Bear takes his camera and shows the gang? — I grabbed their camera and did [the audition] selfie-style the exact same way that Bear did it. I was like, “These are my friends!” and I showed the casting director and all [of them]. I got really involved. It was a good experience. I feel like that really contributed to me landing the role. 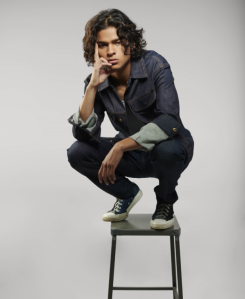 TVLINE | Is there anything about the story you particularly relate to?
Sterlin Harjo is thousands of miles away from me, and Bear is very similar to D’Pharaoh Woon-A-Tai. It was pretty scary to see. When I first read the script, I was like, “Is this motherf–ker spying on me? Did he hack my phone or something?” [Laughs] It was so accurate to what I was doing, what I saw and what I felt. I’m from a big city [but] just like how there’s times where [the Reservation Dogs] want to run away and find a safe haven, it was the same thing for me. I know that where I’m living is not the place I want to be, so I relate to Bear to the fullest. It feels so real.

TVLINE | At the start of Episode 4, Bear is super excited for his estranged dad to visit. How would you describe their relationship going into the episode?
They left off on not the best note. He left. What’s interesting with Bear, he looks past a lot of that s–t. It’s not like he had a hate for his father leaving. He still loved his father. His dad’s a rapper, so he kept thinking, “Oh, he’s going to pursue his career.” Bear loves his family regardless. He loves his dad in the beginning and puts up with that stuff. Even in the episode, when he’s on the phone with Punkin, he’s heard this all before, but this time he didn’t think he was going to hear it. In the episode he says, “I know my father,” even though he probably doesn’t. The memories he was talking about were from his childhood. You know what it’s similar to? Have you watched Boy, Taika’s film?

TVLINE | I have! I loved it.
You know how Boy talks about his dad escaping jail, and has this whole image [of what he’s like] in his mind? It’s very similar to Bear’s experience. That’s their relationship, in my opinion. 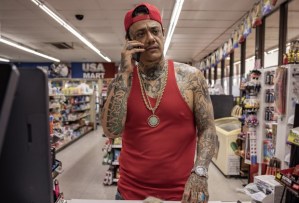 TVLINE | We see clips of Bear’s dad, Punkin, throughout the episode, and the dude’s a total character! How would you describe him?
[Laughs] He’s out there! The guy who plays him, Sten Joddi, is an amazing actor. This was his first role, and he’s funny! He took his time, which is amazing. He was nervous when I first met him, but he killed it in my eyes! I just want to put that out there first.

Bear would tell you Punkin’s the best rapper ever. He made a hit song that was bumping on all the reservations all over America! But, straight up, he’s just a deadbeat dad. He makes promises he knows in his heart he’s not going to keep. He still has this idea of Bear being super young. He thinks Bear will just forget about it later, but the more and more he does that and the more Bear grows up, it’s definitely taking a toll, as you see in the end of the episode. I don’t fully know if Bear actually thought Punkin was being real or not [when he was faking a conversation to an airline about trying to get a flight to Oklahoma]. It could’ve been both ways. Bear knew he was bullsh–ting, but also, it could still fit into his belief that his dad was trying. Both of those run through my mind. It could be either or, which is pretty depressing. We don’t know if he knows he’s being finessed or manipulated.

TVLINE | The scene with Bear and his mom in the car was a very emotional one. Was it particularly difficult to shoot?
Yes, it was difficult to shoot. When we shot that day, I wanted to get into my own head. It’s not that he starts the scene pissed off, he doesn’t, but it builds to that. I took a little bit from personal experiences. Hearing those words, “Oh, I’m not going to make it,” and [thinking about] how Bear spent $90 of their money to see him, and the Godzilla film he buys… it hit me mid-conversation. That’s what got me, and brought up that natural emotion of, “This is my father who doesn’t really give a s–t about me.”

TVLINE | Is there anything you can tease about what’s to come for this father/son relationship? Will we see Punkin again this season?
When I was talking to one of the writers when we first started shooting, they were thinking maybe Punkin would come. He was supposed to come [to Oklahoma], but they changed it. I don’t know if I should say this because maybe they’re going to use it later [Laughs]!

He’s only in that episode [of Season 1] actually, but will we ever see him later if we get a Season 2? I definitely think we will. Do I think Punkin is gonna come to Oklahoma? No, I don’t think so. If (and it’s a big “if”) the Reservation Dogs go to California, I don’t even know if Bear will want to go see his dad at that point. By the time they get there and grow up a bit, [he might have the] realization of: “Hey, he doesn’t give a s–t about me, why should I give a s–t about him?” Will Punkin redeem himself in later episodes? I can definitely see that. I don’t know what the writers are gonna do with it! They’re so unique, and hit you when you’re not expecting it. The writers’ room is amazing, and I’m happy and lucky to have such amazing people representing us.