“Sometimes it’s easier to figure out someone else’s secret than it is to deal with your own.”

That observation by Steve Martin’s character in Hulu’s new comedy Only Murders in the Building is a nice little summary of the show… and of the current true-crime craze, too. Only Murders — premiering Tuesday, Aug. 31 on the streamer; I’ve seen the first four episodes — takes square aim at our strange collective fascination with other people’s grisly deaths, and it pummels that target with a barrage of sharply honed laughs, bolstered by the presence of two comedy legends. Yeah, the murder mystery stuff is just OK. But the humor, and the unexpected poignancy, here make it a case worth diving into. 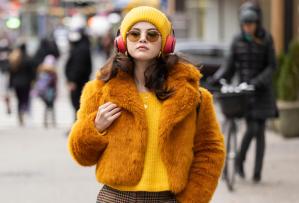 Set in a charmingly hostile New York City, Only Murders follows three residents of a swanky Upper West Side apartment building: Charles (Steve Martin), a barely remembered actor from an old TV detective show; Oliver (Martin Short), a grandiose theater director, complete with ever-present scarf; and Mabel (Selena Gomez), a morbidly inclined artist. On the surface, the three seem to have nothing in common — but then they learn they’re all hooked on the same true-crime podcast. Their shared love of digging into unsolved crimes kicks in when a dead body is discovered in their building… and they can’t resist the urge to investigate.

It’s a little bit Rear Window, a little bit Manhattan Murder Mystery — and a lot of fun, actually. Charles, Oliver and Mabel do make an odd trio, but it makes sense: They’re all loners, desperately in search of a purpose. All three of them have hit hard times in various ways, and the scripts from Martin and co-creator John Hoffman have a surprising emotional resonance as we gradually learn what’s missing from their lives. At first, I admit that Gomez’s presence felt like stunt casting to balance out the two veteran comedians, but she manages to hold her own nicely as the cynical, sharp-tongued Mabel. 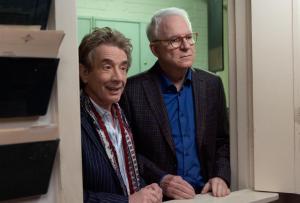 Only Murders really sings, though, when Martin and Short are in their comedy wheelhouse. These two are seasoned pros; with them, it’s effortless. The rude banter between Charles and Oliver is a reliable source of laughs, and Short is especially hilarious as the loudly confident, deeply insecure Oliver in a delightful turn that reminds us just how funny he can be. (I could listen to him all day recalling the disaster that was Splash: The Musical.) Plus, their building is teeming with colorful oddballs and bitter old grumps. In New York City, everyone’s on top of each other and in each other’s business, and the show makes good use of that overly intimate claustrophobia. Nobody liked the murder victim much, it turns out, so there are plenty of suspects — including a big-name celebrity in a supremely silly cameo.

The actual murder mystery plot, though, doesn’t work quite as well as the comedy. The initial murder is just the beginning, revealing a Russian nesting doll of mysteries within mysteries. But all the twists and reveals throw a wrench into the comedic momentum, and they’re kind of predictable — almost obligatory. (It’d be refreshing to see a TV show that doesn’t tease a murder mystery with cliffhangers and red herrings, at this point.) I never found myself getting all that invested in who the killer is, really. I just kept wanting to get back to the comedy bits. But if sitting through a mediocre murder story is what it takes to hear Martin Short sing the praises of eating dips for dinner, I say: Sign me up.

THE TVLINE BOTTOM LINE: As a murder mystery, it’s just OK, but as a comedy, Hulu’s Only Murders in the Building is a case worth investigating.