Although in Sunday’s Animal Kingdom, the Codys earned back their home and then some from Pam, the mood around the den of thieves was anything but celebratory. While Pope, still on walkabout, saw an opportunity to do a good deed by doing a very, very bad thing, Craig and Renn seemed determined to win an unspoken contest to see which of them could make poorer choices, and Deran gained a new enemy even as an old one closed in on him. And if you keep reading, we’ll go over all the details…

’THE DEVIL WAS JUST AN ANGEL WHO LOST HIS WAY’ | In the ’80s portion of “Splinter,” Janine made the mistake of leaving “Uncle Manny” in charge of Andrew and Julia while she went to deliver Max his cut of their latest job. By the time she returned from the meeting — which was extended by a romp with Deran’s future father, Billy — not only had Manny taken off, but the kids were nowhere to be found. After looking all over town for them, Janine returned to her trailer to discover that they’d gone to look for her; Andrew had been worried that Max would hurt her the way that he had Jake. When the youngsters got lost, they’d called their Auntie Birdie. And despite the s—t that went down between her and Janine, Pam assured her that she could still always call her if she needed to. Now I don’t know if that’s a wise friend, but it sure is a good one. 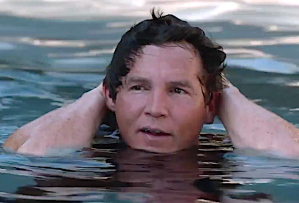 In the present, Cassandra, still in the desert with Pope, was delightedly firing off his gun when he stood between her and the abandoned car at which she was aiming. “Do it,” he said. “I deserve it.” Suddenly, it dawned on him that Smurf had wanted him to die with her “because she knew what I am.” Nonetheless, Cassandra refused to grant his death wish. Later, while taking an ill-advised dip in her ex-husband Liam’s pool, she wouldn’t let Pope call himself the devil. And even if he was, it had been God that cast the devil out, she noted. “What did He expect?” Later still, Pope observed Cassandra trying to steal some forbidden time with son Henry. After she was busted by Liam, who couldn’t wait to tell the family court judge, Pope pissed her off by (unintentionally and not even really) implying that she hadn’t tried to win custody. Anyone else thinking that he’s going to use his murderous skillset to gain Cassandra sole custody? 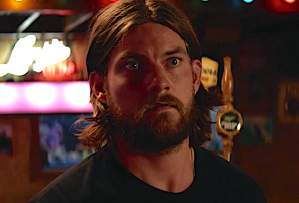 ‘I THOUGHT YOU WERE ON MATERNITY LEAVE’ | At Renn and Craig’s, she worried her babydaddy anew by pushing him to get their next job scheduled. She’d had a taste of that robber’s high, and she wanted more, more, more. When Craig expressed his displeasure that Deran had brought her in on that one-time-only heist — emphasis on the one-time-only — she hit the roof so hard, she could’ve left a skylight in her wake. Off their blowout about her potential career as a realtor, Craig ran into Deran at the beach and called him out. One minute Deran wanted nothing to do with the business, the next he wanted to make all the calls? In turn, Deran was mad that Craig had asked him to stay in Oceanside. “How about you figure out how to take care of your own family,” Deran hollered, “before you start telling me how to take care of ours?” 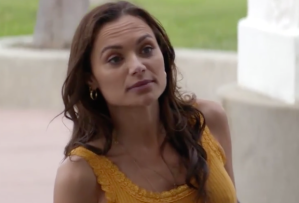 Grumpy as hell, Craig invited over manny Blaise and his underage friends for a rager at the Cody place. After J’s meeting with Lark — at which they discovered that they were the coolest heads in their respective families — the house was once again theirs, after all. But the bash didn’t turn out to be nearly as raging as Nick’s dad would’ve liked. The kids didn’t even want to do any of his hard drugs. (Imagine.) Finally, when not even throwing all of Deran’s stuff in the pool perked Craig up, he took the whole crew to the beach, where he climbed to a precarious perch and, when the cops arrived, took a flying leap into the ocean. Which sounds bad — until you look at how Renn spent the rest of the episode. When her usual drug supplier turned down her request to get back in business, she sought out his baby-faced new dealers, beat the crap out of one and scared the crap out of the other two. Like, da-amn! 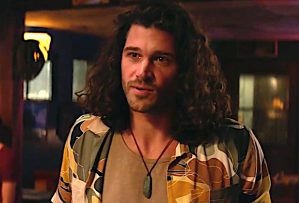 ’I CAN’T BELIEVE PEOPLE WANT TO GO DRINK AT A PLACE CALLED SON OF A BEACH’ | After Deran refused to be shorted on his liquor order because the booze was slated to go down the block to Son of a Beach, he was paid a visit by the new watering hole’s owner, Parker, unintimidated but still willing to pay for the rest of his order. When Deran took a hard pass, the guy reached across the bar to begin retrieving his bottles… at which point Deran threatened him with a knife. Backing off, Parker said, “See ya around,” in that way that makes it clear it wouldn’t be to hang 10 or anything. Later, Deran couldn’t believe how dead his bar was. Were the drink specials at Son of a Beach that amazing? It might not just be that, admitted bartender Tommy. “People are saying that you and your brothers ‘took care’ of Adrian.” As if that wasn’t enough of a punch to the gut, Tommy added, “Things feel different since your mom’s been gone.” 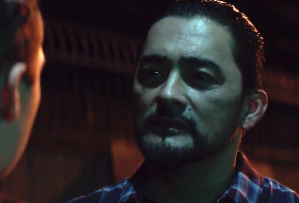 Finally, when J showed up for a meeting with Pete, he wasn’t greeted with the good news that his partner in crime had found a buyer for all that coke, he was greeted by what could’ve easily turned into an ambush. Why, Pete wanted to know, had the DEA showed up on his doorstep? An Agent Livengood? Ruh-roh. J emerged with his head still attached to his shoulders, but only because he had the good sense not to protest too much when Pete said that he’d dumped the coke. That, and Livengood wasn’t really interested in Pete, he could tell. “The only thing this guy seemed to care about… was Deran.” So, what did you think of “Splinter”? Will Pope kill for Cassandra? Is Parker really a new foe for Deran… or a new love interest? And how long till Renn gets herself killed? Hit the comments.