Sandra Oh’s Ji-Yoon Kim makes academic history in Netflix’s The Chair premiere — but her achievement comes with some serious drawbacks, too.

In the six-episode comedy that dropped in full on Friday, Oh stars as the first female and woman of color to serve as chair of the English department at the fictional Pembroke University. In the series premiere, though, she doesn’t get much time to bask in that milestone; in fact, her actual office chair breaks and collapses about three seconds into her first day on the job, which, in hindsight, she should have taken as some sort of omen.

Ji-Yoon has inherited a department that’s struggling to get students enrolled in its classes, and its budget is getting slashed. Even worse, Pembroke’s dean is looking to push three aging English professors — all of whom earn high salaries, but can’t seem to fill classrooms anymore — into retirement, and he wants Ji-Yoon to be the one to persuade them to bow out. Fun!

And then there’s the enigma that is Professor Bill Dobson (Transparent‘s Jay Duplass), who’s 1) Ji-Yoon’s predecessor as department chair and 2) perhaps a complicated quasi-love interest for her. He’s also proving to be one of Ji-Yoon’s biggest headaches in the department, and a main focus of Episode 1: After recently losing his wife and sending his only child off to college, Bill is a bit of a mess. On the first day of classes at Pembroke, Bill shows up very late (and hungover) to the course he’s teaching, and when he hooks up his laptop so the entire class can see his screen, an old home video of Bill’s late wife appears. She’s very pregnant and very topless in the video, telling Bill that she “can’t tell whether I have to take a s—t or if [the baby’s] coming.” 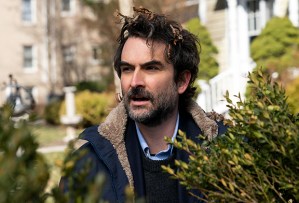 The video, despite being the kind of thing you definitely don’t show your undergrad students, is actually quite sweet, and Bill gets caught up staring and smiling at it until his TA rushes over to shut the whole thing down. And after a quick apology for the video, Bill simply moves on.

The mishap is actually Bill’s second moment of questionable behavior in the premiere, after accepting a ride to campus from a female Pembroke student who’s a longtime fan of Bill’s work. She’s on the waitlist for his Death and Modernism class and asks him to sign her copy of his book before he leaves the car, which he does, and they briefly bond over their knowledge of a T.S. Eliot poem. But Bill later learns that someone from the Dean of Students’ office saw him in the girl’s car — and the student in question is actually the daughter of a Pembroke Board of Trustees member. Yikes.

Near the end of the premiere, Ji-Yoon is forced to give Bill some tough love, imploring him to “get your s—t together” after she finds him sleeping on the couch in her office, and late for his class again. Bill doesn’t take the criticism particularly well at first, but it does seem to impact the way he teaches his next course. He asks the students how many of them really did the reading for that day’s class (not many!), then asks if anyone is drunk or high right now. (One student confesses to being stoned.)

The suddenly candid questions prompt a couple of students to take out their phones and record Bill, perhaps anticipating some kind of meltdown. In truth, Bill doesn’t give some sort of nonsensical monologue and have a breakdown in front of his students; he actually appears to put legitimate effort into his lecture for the first time in a while. But when Bill writes the words “fascism” and “absurdism” on the board and explains the difference between the two, he emphasizes his description of fascism by saying the words, “Heil Hitler!” and gesturing a Nazi salute.

There’s some commotion in the classroom when he does that, and the students exchange some shocked looks, but the moment otherwise passes without incident… until, as the camera pans out across the lecture hall, we see that at least one student captured Bill’s salute on her phone, and she seems ready to share it.

OK, your turn. What did you think of The Chair‘s first episode? Cast your votes in our polls below, then hit the comments with your full reviews!