Warning: This post contains spoilers from Power Book III Season 1, Episode 5. Read at your own risk.

Having the perfect actress play Kanan’s mom Raq for the spinoff prequel Power Book III has mattered from the very start for executive producers Curtis “50 Cent” Jackson and Courtney Kemp.

For fans who watch the Starz drama, which airs Sundays at 8/7c (when not on hiatus, as it is this week), Patina Miller is easily the best and only choice for the role. The Tony award-winner captivates as not only a beautiful and ruthless drug queenpin, but also as a dedicated mother who wants the world for her inquisitive teenage son Kanan (Kirby Buckets‘ Mekai Curtis).

When the 1990s set drama aired last week, viewers saw Raq teach Kanan how to cook crack so he can take care of himself when and if something happens to her. A surprising ending also revealed that Det. Malcolm Howard (This Is Us‘ Omar Epps) is Kanan’s biological father, instead of the deceased drug lord Raq said.

Raq constantly tries to protect her only child at all costs, Kemp says, from the sock full of batteries she gave Kanan to defend himself in the premiere episode, to the fact that she’s concealing his actual paternity. 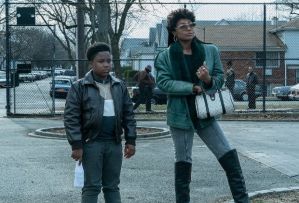 “Even though Kanan is the titular character, the phrase ‘Raising Kanan’ is about someone rearing him and that’s this person,” the Power universe co-creator says. “There’s really something great there. I’m a single mom and I’m always trying to write and talk about that. What is it like to be a Black single mom? What does that mean?”

Kemp adds that she even draws from her own life for inspiration.

“I’m not giving my daughter a sock of batteries, but I might be telling her how to deal with men in the business world,” Kemp reveals with a smile. “That is my own version of a sock with batteries in it. You gotta earn your respect however you can get it. I once had a person call Power my baby. I was like, ‘No, I have a baby. She’s a real person. This is a TV show.’ Let’s be real. That person doesn’t know my priorities. Like Raq, only I know my priorities.”

Jackson adds that Miller, whose previous TV credits include Madam Secretary and Mercy Street, is able to do things with the character other actresses couldn’t and exceeds what he and Kemp imagined.

“Patina Miller comes from Broadway,” Jackson says with pride. “Stage actors are used to remembering pages and pages of lines and performing on the spot in front of live audiences. There’s a different level of intensity. She has a similar intensity to Nicholas Pinnock, who starred on a show I did called For Life on ABC.” 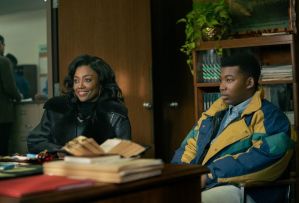 “I read the script and immediately was like, ‘Holy crap! This is insane,'” Miller recalls. “I had never read anything like that in my life. I’ve been acting for a long time, and I always search for characters that make me gasp and cheer. I like to get excited about things because it makes me want it and hungry to do it, and that’s exactly what this role did. It made me hungry.”

Miller adds that she hopes fans are rooting for Raq, just the way she is — murder, lies and all.

“Raq is so three-dimensional. She is a hard woman, but she’s also loving and vulnerable,” Miller concludes. “She’s a business woman who goes nonstop like a boss. She also goes out on dates, because she is a woman who wants to flirt too and she’s a mom. All of those things jumped off the page and made me excited. I am incredibly humbled and so blessed that I got the opportunity to flex all of these muscles and put all of the life drama I could into Raq.”