Chicago Fire rescue squad lieutenant Kelly Severide is newly engaged to Stella Kidd, but their wedding won’t be the first time the firefighter has made the trip down the aisle.

As longtime fans of the NBC drama will remember, back in Season 3, Severide got hitched in Las Vegas to a graphic designer named Brittany Baker (played by Serinda Swan), whom he had just met at the craps table. But the couple’s marriage ended just as quickly as it began when they both realized they had rushed into the relationship to escape the death of a loved one. Still, despite the briefness of their romance, Brittany made a lasting impression on viewers.

For TV vet Swan, who also starred in former Fire showrunner Matt Olmstead’s A&E drama Breakout Kings, it was all about holding out for the right character. “Matt kept asking me to come and [guest-star] on the show in my offseason from Graceland,” Swan, who currently headlines the CW series Coroner, tells TVLine. “I was like, ‘Yeah, I would love to!'”

The producers then proceeded to pitch the actress various roles, which didn’t quite work out, until they finally landed on the perfect part. “They’re like, ‘So there’s this girl, and she’s trapped,’ and I’m claustrophobic,” Swan recalls. “And then, ‘There’s a woman, and there’s a burning building,’ and I was super scared of fire. Finally, they’re like, ‘Severide’s love interest,’ and I was like, ‘Yep, let’s do that!'” 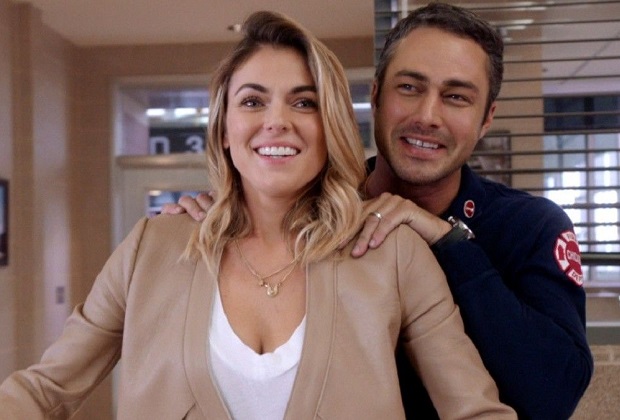 As it turns out, Swan and Fire leading man Taylor Kinney had actually already worked together before when he impressed in “a really small guest star [role] on [Breakout Kings],” the actress notes. “We all were like, ‘Yo, he’s great. Like, he’s really, really good. And then obviously, Matt talked to him and got him to move over to Chicago Fire.”

Brittany, however, didn’t stay in the Windy City for long, abruptly leaving town (and her hubby) after just four episodes to confront her past. “[I] had to exit so fast, because I had to go off to the next season of Graceland, that not everything was tied up properly,” Swan says. “So I kept getting all these messages being like, ‘When do you come back? We know you come back. You guys are still married,’ and I was like, ‘I actually don’t think I’m ever coming back because I’m about to go shoot something for seven months. I don’t think this is happening.'”

Even though many years have passed since Swan’s short arc — and Severide told his now-fiancée Stella in a Season 6 episode that he and Brittany got an annulment — “people still ask me about it all the time,” the actress reveals, adding that she “would be down for [Brittany] to just randomly show up one season and mess things up a bit for him again.”

#OneChicago fans, would you like to see Brittany come back? Hit the comments with your thoughts!