Seldom is it that our dreams play out the way we imagine them in our minds. This is what Zoey learned while interning for a streetwear fashion house on this week’s grown-ish.

Thursday’s installment showed Zoey loving every moment of working for a fashion trailblazer named Esme. Although it was an unpaid internship, the now college senior felt like she was making connections and learning a lot. That is, until she learned that Esme had no qualms about stealing her ideas.

First, she borrowed Zoey’s observations about cultural appropriation and claimed them as her own in an online interview. Zoey grew miffed that Esme didn’t credit her, until her boyfriend Aaron reminded her that she formed those very ideas by listening to him. So Zoey let that slight slide.

Then Zoey saw that Esme had ripped off her idea for a cropped letterman jacket. Zoey had even added the initial of her first name to the jacket, which Esme was now telling people stood for Generation Z. Wow.

Blindsided, disappointed and heartbroken, Zoey asked her friends Luca, Nomi and Ana what she should do about Esme stealing her jacket design, and the friends couldn’t agree. Nomi and Luca said Zoey should confront Esme, and Ana said Zoey should stay mum because she needed the internship to graduate. 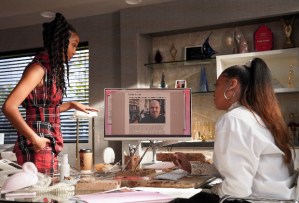 Zoey, who said she felt like an underdog with high cheekbones, decided to talk to Esme about her sticky fingers. But when she got into her office and saw all the photos of her boss with her white fashion counterparts, Zoey changed her mind and decided to let it go. Sure, she would have to guard all of her ideas very closely from that point on, she reasoned, but Esme needed her assistance more than her judgment, and that’s what she decided to give.

The only problem is Zoey didn’t tell Luca about her new and improved Black Girl solidarity stance, and old dude took to the interwebs to put Esme on blast for pilfering Zoey’s creation. Yikes. What is Zoey going to do now, and will Esme fire her?

Elsewhere in the episode titled “A Peace of Light,” Aaron lost his cool as a T.A. and got demoted to teaching night classes, and Jazz finally opened up to the school-appointed therapist about her track running anxieties.

What did you think of Luca’s actions? Do you believe it was his battle to fight? Drop your thoughts in the comments.