Eat a little too much yogurt, Terry?

During the first of Thursday’s back-to-back episodes of Brooklyn Nine-Nine (NBC, beginning at 8/7c), Captain Holt and Amy manage an understaffed precinct, after a majority of uniformed officers call out due to a sudden case of “Blue Flu.” In TVLine’s exclusive sneak peek, a meeting between the captain, the sergeant and lieutenant is disrupted when Jeffords’ stomach begins acting up. After a few unmistakable growls, Jeffords cops to being nauseous, which prompts Holt to ask if his lieutenant needs to go home, or if he’s willing to tough it out.

“What, so if Terry goes home, he’s not tough?” Jeffords asks. Holt tells his lieutenant that they don’t have time to make this about some “larger insecurity” regarding his toughness, but it’s too late. This can of worms cannot be unopened.

“First of all, I’m not insecure about my toughness,” Jeffords insists. “Secondly, being sick has nothing to do with being tough.”

In a desperate attempt to prove his toughness, Jeffords asks Santiago to do something without thinking it through, even for a second. Watch the video above to see how this ridiculous request plays out. 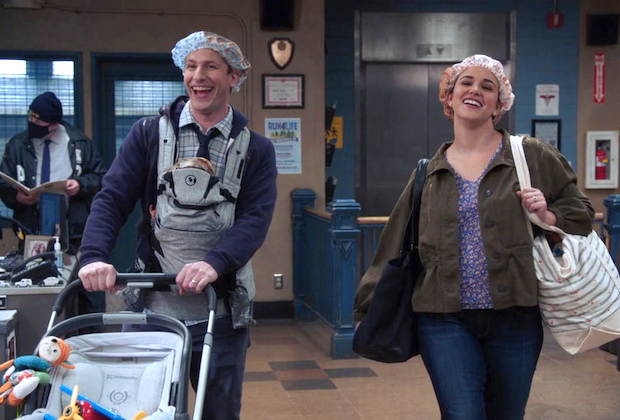 “Blue Flu” will be immediately followed by a second B99 episode titled “Balancing,” wherein Jake and Amy create a system to balance work and childcare. Rosa, meanwhile, takes on a new houseguest.

Following Thursday’s double-header, just six episodes of B99 remain, which are set to air on Aug. 26, Sept. 2 and Sept. 16. In the first of those episodes, titled “PB & J” and airing on the 26th, “Jake takes an old friend for a ride.” (We won’t reveal who that “old friend” is, but the title is kind of a dead giveaway.)

Press PLAY on the video above, then hit the comments with your hopes for the remainder of Brooklyn Nine-Nine‘s farewell season.