Nicole Kidman and David E. Kelley’s latest adaptation of a Liane Moriarty novel has arrived — and this one features some big little lies, too.

Hulu on Wednesday debuted the first three episodes of Nine Perfect Strangers, based on Moriarty’s 2018 book about the disparate guests at a wellness resort called Tranquillum House whose stay at the center gets real weird, real fast. Before we get into the more disconcerting events of Episode 1, let’s break down Tranquillum House’s nine new residents.

First, we’ve got book author Frances (Mike & Molly‘s Melissa McCarthy), whose successful writing career appears to be past its prime; at the start of the premiere, Frances’ agent informs her that her publisher is passing on her latest novel and would prefer to buy out her contract altogether. (Frances takes this news… not well.) Then, there’s social media influencer Jessica (SMILF‘s Samara Weaving) and her husband, Ben (Snowfall‘s Melvin Gregg), who are visiting Tranquillum House in an attempt to save their relationship.

The Marconi family — Napoleon (Boardwalk Empire‘s Michael Shannon), his wife Heather (Australian actress Asher Keddie) and daughter Zoe (Maniac‘s Grace Van Patten) — is attending together, and they appear to be mourning the loss of a loved one. Tony (Homecoming‘s Bobby Cannavale) is a grizzled “run-of-the-mill a—hole” (his words!) who seems to have a strained relationship with his daughter. Carmel (Black Monday‘s Regina Hall) is sweet, but extremely nosy and perhaps a bit more volatile than you might suspect. And rounding out the group is wild card Lars (The Alienist‘s Luke Evans), the only Tranquillum guest who seems to intuit that something’s not quite right with this resort. 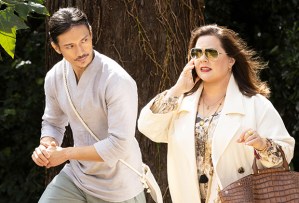 Tranquillum House does come off a little strange right off the bat, though. The guests have their cell phones confiscated immediately, which might be standard for a retreat-y place like this, but Tranquillum leader Masha (Kidman) is also watching her guests on multiple security cameras, and the guests are given personalized smoothies that must be completely consumed, as the drinks were “precisely constructed.” Uh, weird! But the drinks appear to taste delicious, so no one thinks anything of it. Lars, however, is highly skeptical of why Tranquillum needs each guest’s medical records — and periodic blood draws (?!) — but the employees calmly wave off all questions with some type of, “This is all to improve your wellness journey!” answer.

Ahead of the guests’ official orientation that night, Frances has a one-on-one chat with Masha, who suddenly appears in Frances’ room while she’s having a good cry about the unfortunate state of her life and career. Masha, through her ever-changing Russian-ish accent, explains to Frances that her stay at Tranquillum will take courage and will be “sometimes unpleasant.” But in Masha’s experience, many of her guests lead comfortable lives at home, and “they come for the suffering.” Frances counters that she doesn’t want to suffer, and Masha serenely remarks that she already is.

Masha makes her next appearance at that evening’s orientation, where the nine guests are gathered in a circle. Even as the group gets frustrated with Masha’s methods — like rummaging through the guests’ bags and swiping forbidden items like wine and chocolate — she has a disarming way about her that appears to turn the guests’ hostility into mere suspicion toward her. Masha explains that she came to America from Russia and climbed the corporate ladder; we see flashbacks of her working tirelessly in her office, smoking, partying, rinse, repeat. One day, she was shot in a parking lot, and she was considered clinically dead… until one of her Tranquillum employees (played by The Good Place‘s Manny Jacinto), who was a paramedic at the time of Masha’s injury, managed to bring her back to life.

She goes on to say that there is birth in death, and joy in tragedy, but her monologue doesn’t sit well with the Marconis, who have obviously lost someone important to them. Zoe leaves the orientation in tears, and Heather confronts Masha about her inappropriate choice of words; after all, doesn’t Masha already know the Marconis’ story? Didn’t she know they’d be triggered by her speech about death?

“You know why we’re here. Do you really mean to f—k with us like this?” Heather asks. And with a creepy, calm smile, Masha responds, “This is Tranquillum. I mean to f—k with all of you.” Well, at least she’s self-aware.

OK, your turn! What did you think of Nine Perfect Strangers‘ premiere? Cast your votes in our polls below, then drop a comment with your full reviews!