In the above sneak peek from the series premiere (airing this Sunday at 10/9c), Captain Boone is welcomed to Chapelwaite by its former caretaker, who among other things casts side-eye at his lack of a Mrs., before warning him about a locked area that should absolutely stay locked (but we’re guessing probably won’t!).

As Charles settles in in Chapelwaite, he will have to confront his family’s sordid history, then fight to end the darkness that has plagued the Boones for generations. 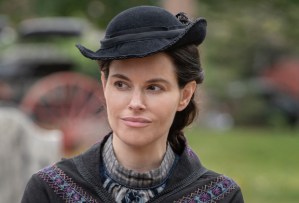 Emily Hampshire (Schitt’s Creek, 12 Monkeys) also stars in the series, as Rebecca Morgan, an ambitious young woman who left Preacher’s Corners to attend Mount Holyoke College and has returned home with an advance to write a story for the new and prestigious Atlantic Monthly. Her writer’s block lifts when Captain Boone arrives in town and she applies to be governess of  Chapelwaite, in order to write about the Boone family. But in doing so, Rebecca will not only craft the next great gothic novel, she’ll unravel a mystery that has plagued her own family for years.

In addition to the exclusive sneak peek above, you can also watch the full trailer below: