Quite a few mysteries and problems got solved on the latest installments of Netflix’s K-drama You Are My Spring.

The biggest problem was, of course, that Da Jeong and Young Do had broken up and were moping around nursing their broken hearts and missing one another in Episode 13. Da Jeong’s mother Mi Ran intervened, as did Young Do’s best friends and ex-wife, Ga Yeong. But it wasn’t until Da Jeong saw a video of Young Do explaining how much he regretted breaking up with her that she realized they could find their way back to love.

The two reunited in front of the steps near his old grade school and kissed as if no time had passed at all. Their reunion was so emotionally captivating that it felt like one or both of them might get mowed down by a car while crossing the street to embrace. Seriously, it was that intense. Thankfully, that isn’t this show, and the two love birds stared into one another’s eyes and smiled because they were finally together and at peace.

In Episode 14, they started doing things as a couple. They fell asleep talking on the phone, bragged to loved ones, friends and coworkers about one another, and even went grocery shopping together. When Da Jeong learned while watching the news that the homeless stalker had killed all those people and framed Chae, she grew upset. Sensing something might be wrong, Young Do called her and put her mind at ease. 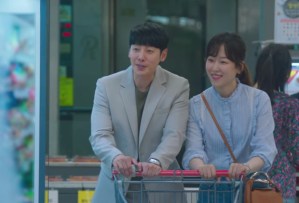 Da Jeong later told him that one of the things that broke her heart the most when they were apart is that she hadn’t had the chance to help him the way that he had helped her. That’s when Young Do opened up and revealed the pain and loneliness he felt as a child when his brother died. Worst of all, he said, his mother pushed him away and made it seem like the death was his fault.

A compassionate Da Jeong said while part of her wanted to curse his mom and ask her what she was thinking, the other part of her knew that Young Do would hug his mother if he could and make her feel better. That’s when Young Do decided to pay his respects at her burial site and forgive her. He was so crestfallen after the spiritual farewell that Da Jeong handed him a lollipop like the one she had given him when they were kids. 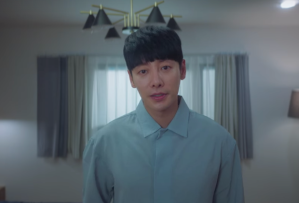 Young Do smiled, and then he looked down and saw the little stone and dandelion tribute the two had built together as children. He placed the lollipop next to the weed, just as Da Jeong had done when she was little, and then it clicked. Da Jeong was that girl with the lollipop, which meant she was also his long-lost first love. Eventually, Da Jeong made the connection, too, and they smiled knowing smiles. That’s when Young Do told Da Jeong he loved her for the first time, and she said she loved him, too.

While all of this beautiful love and recollecting was taking place, Ian Chase was avoiding more police questions. He refused to admit that he was the one who paid the stalker to vengefully kill his childhood enemies when he was 18. He also didn’t tell detectives that Chae killed himself to protect Da Jeong from the stalker, who said he would kill her if Chae didn’t take the fall.

Later, when Ian Chase ran into Da Jeong at the hotel, he asked why she had questions about his deceased twin brother. Da Jeong said she wanted to feel sympathy for him because he was in pain. He had also left her a childhood picture and wrote a message on the back saying he had finally found her. She asked Ian Chase what that meant, and Ian explained that the three of them had also met as kids. Chae had stayed in Korea, Ian got sold into adoption and sent to America, and Chae had fallen in love with Da Jeong as a girl because she was one of the few people who was kind to him.

What did you think about all of the mysteries and conundrums solved in Episodes 13 and 14 of You Are My Spring? And are you happy Da Jeong and Young Do are officially a couple? Share your thoughts in the comments.