The following contains major spoilers from the Season 1 finale of The CW’s Superman & Lois.

Superman & Lois has further supersized its cast for Season 2, with the addition of another series regular. 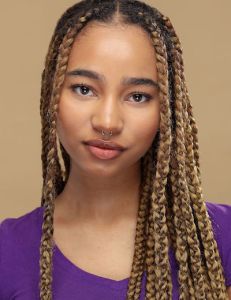 The superhero series ended its freshman run on Tuesday night with the crash landing in Smallville of a space pod carrying Natalie Irons, John Henry’s daughter via the Lois of his own Earth.

TVLine can now confirm that Tayler Buck, who plays Natalie, will be a full-time cast member for Season 2. She thus joins Sofia Hasmik, who plays Smallville Gazette journo Chrissy Beppo, as a new series regular.

That episode revealed that after witnessing Superman kill her mother Lois Lane on her Earth, Natalie used her brilliant technological mind to help her father build a super suit to fight the Man of Steel. But when her father mysteriously disappeared mid-battle, Natalie was driven by her deep love and devotion to find the family she lost.

You can read much more about what Natalie’s arrival on our Earth means for Lois and Clark in our in-depth post mortem Q&A with showrunner Todd Helbing.

Superman & Lois will return at midseason.

Want scoop on Superman & Lois Season 2, or for any other show? Email InsideLine@tvline.com and your question may be answered via Matt’s Inside Line.