Courtney Whitmore was more than a little green with envy in this week’s episode of DC’s Stargirl. Elsewhere, the ruthless and power-hungry Eclipso claimed his first victim!

The second episode of Season 2 opened with a a brief flashback to just six days ago, where Jennie, the young  woman that Court just faced off against in the kitchen, effectively “aged out” of the Milwaukee group home where she had been living. As a parting gift, the annoyingly perfect Jennie was given a lozenge tin that long ago had been dropped off for her — containing a toy car that belonged to her brother Todd… and her father’s Green Lantern ring.

Cut to the Whitmore-Dugan home circa now, late at night, where Court is more than a bit suspicious of the intruder who came to “steal” the Green Lantern. Jennie introduces herself to the entire family and explains that the lantern belongs to her, as Green Lantern Alan Scott’s daughter. Pat is a bit taken aback to meet another offspring of an OG JSA colleague, whereas Courtney is left to feel a little less than, seeing as she as Stargirl is not a true legacy.

Adding insult to injury: After crashing on the downstairs sofa (so that a complete stranger of questionable identity can sleep in your daughter’s bed, Barbara?), Court wakes up to find everyone raving about the breakfast Jennie made. (My question: How tasty can pancakes be?) Worse, Courtney can’t stay to keep an eye on Jennie, since she has to go to summer school. One silver lining: Yolanda, despite pulling straight-As, is also in the class, which is led by art teacher Mr. Dysinger. 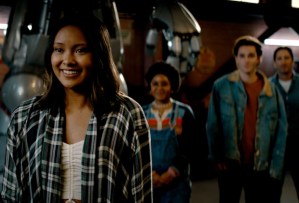 After school, Courtney and Yolanda swing by the Pit Stop and find Jennie regaling Pat and the other JSA members with her Green Lantern ring, which Pat helped her gain better control of by recognizing how her emotions affect it. Yolanda can’t help return Jennie’s kindness upon being introduced, but Court is more than a little brusque with the newcomer — to the point that Rick, Beth et al declare “Not cool.” When Pat helps Courtney realize how much she and Jennie have in common, she makes nice. Jennie, though, is triggered by the mention of her “having everything,” when all she wants to do is find her brother, and she angrily knocks over the lantern, seemingly damaging it. As the item begins swelling with light, the kids run it down to the park to… I dunno, fix it in public? 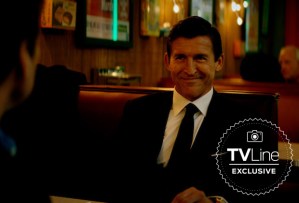 Pat at this point has dashed over to Richie’s Diner, after being sent there by Barbara to suss out a stranger named Richard Swift (played by The Affair’s Jonathan Cake). Pat has just started collecting clues on the dashing, vintage Jaguar-driving Brit, when he spots the panicked kids run by outside and chases after them.  In the park, Jennie is counseled to use her emotions to calm down  the lantern, which at first seems to work. But when she falls short of powering it down, it erupts with a green energy wave that knocks everyone off their feet — especially Jennie herself, who is now able to fly amid a green energy bubble!

Alas, that would be the last we see of Jennie this episode, for as Court realizes the next morning upon waking and wanting to see her new pal, Jennie packed up and left overnight. But on the bright side, Pat shares with Courtney his realization that The Shade (Richard Swift)  is in town — so there is one more ISA baddie to deal with!

Elsewhere this week: An excited Bobbie Burman’s bid to leave her mind-controlled life with the late Dragon King behind was cut off at the knees  by Cindy showing up on her home’s doorstep. The voice of Eclipso tried to compel Bobbie to kill Cindy with a knife (and thus get her woo girl life back), but Cindy fought back with her shivs. Eclipso then took over Cindy for a bit, turning the right side of her face purple and  making her use the black diamond to, like, feed off of Bobbie’s hate and disintegrate her. (Or something.) Reclaiming her time and horrified to see her stepmon turned into a pile of whatever, Cindy made eclear to Eclipso that that was to never, ever happen again — or back into the box he goes!

What did you think of “Summer School: Chapter Two”?