As Andi reaches yet another crossroad in her relationship with Gary on Tyler Perry’s Sistas, there is one friend who has consistently warned her about him — Karen.

And when the soapy BET drama’s Season 3 midseason finale airs this Wednesday at 9/8c, Karen will be the one who Andi can turn to, if Andi even bothers to tell her, that is.

“Andi hasn’t been sharing a lot with her friends lately,” says Ebony Obsidian, the actress who has expressively brought Karen to life from the start. “She’s felt that judgment from her friends, specifically from Karen. Their friendship is in a very different and precarious place than it has been in the past.”

After all, Obsidian tells TVLine, Karen was the only one who wouldn’t cosign on Gary’s surprise wedding this season. She also cussed him out. But the strain on Karen and Andi’s friendship isn’t just about her candor regarding Gary. Andi also happens to be friends and coworkers with Fatima, the new boo of Karen’s ex Zac. 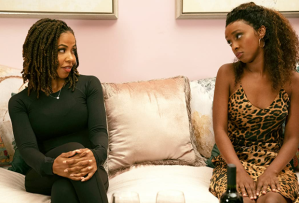 “It’s an intimate and uncomfortable situation,” Obsidian explains. “It’s drama and fun to watch, but it’s also awkward. That supermarket scene? Cringe. Even with that, Karen is a good friend, and she wanted to protect Andi from Gary because he’s such a shady and disrespectful man. We all need a blunt friend like Karen. I wish the people on Sistas would talk things out more.”

Speaking of talking, now that Karen has learned about Zac’s financial windfall, things are going to get a lot more messy and chatty between the exes.

“Money has played a really interesting role in Karen and Zac’s relationship,” Obsidian observes. “There’s a lot of stuff that happened before we started the story that led to how volatile their relationship has been. A lot of times, you’ll hear Karen say things about money, and that’s the center of a lot of their arguments.”

Financial woes, Obsidian says, are an easy scapegoat when it comes to pain.

“His lack of stability, the infidelities and her near pregnancy also play a part,” she adds. “But for her, it isn’t solely about the money. He should pay her back because she spent quite a bit of money on him, if you count it all up. It was much less of a partnership in that capacity. And paying her back really would cut ties. In terms of repairing their relationship damage, it’s going to take a lot more than money.”

Zac’s debt to Karen goes deeper than that, Obsidian argues.

“If only we could all just write a check to make people feel better when we’ve wronged them,” the New York native continues. “But you can’t do that, and in that way, him handing her some money is a bit insulting. He owes her more than that. And that’s what you’ll see play out in the midseason finale.” 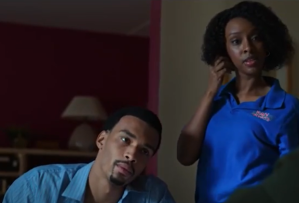 Obsidian, who also costars on Hulu’s Wu-Tang: An American Saga, is most excited that the two shows will overlap when Season 2 of Wu-Tang premieres Wednesday, Sept. 8. She plays Nia, Divine’s sweet but outspoken girlfriend.

Nia is “a little different than Karen. When she says ‘get out,’ she means it,” Obsidian says with a chuckle. “In the second season, there’s a re-introduction to Nia and her place by Divine’s side and her place in the story within this family. It’s really beautiful, and I can’t wait for everyone to see my range and to explore these two very different places and times.”