What were you expecting, “Pilot”?

PLL Reboot: Everything We Know So Far 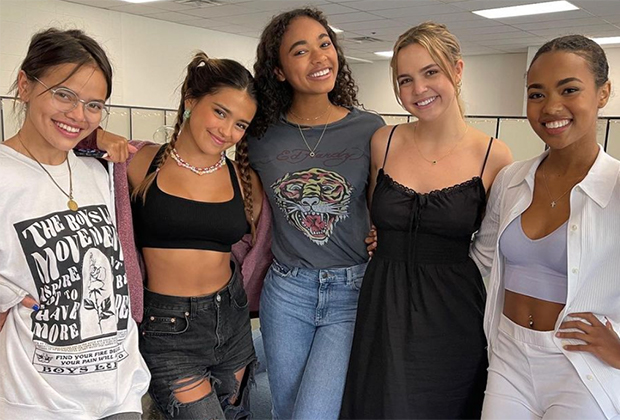 “In honor of Millwood’s favorite night of the year, Friday the 13th, as well as the fact that #PLLOriginalSin starts shooting in 11 days (!), here’s a peak at our first script cover page,” Aguirre-Sacasa wrote in an Instagram post on Friday.

In addition to revealing the title of the reboot’s series premiere (“Spirit Week”), the post also features art from the script’s cover page. Before we get to theorizing, let’s have a look:

Hmm… Three people in animal masks brandishing sharp weapons above a mansion dripping with blood? Nope, nothing scary about that whatsoever. The only question — well, the first question — is: who’s hiding beneath those freaky disguises? Could it be the three Liars who have already been cast in the reboot? Either way, they all dropped a comment to express their collective excitement.

Bailey Madison, who stars as Imogen Abel, wrote, “Oh….. my…. A!!!!! “[Roberto, I] remember seeing the script for the first time and getting goosebumps, as I always geek out whenever you post script covers for your shows… this is really special.”

Chandler Kinney, who plays Tabby, spoke for all of the show’s future fans when she added, “CURRENTLY SCREAMING.” And Maia Reficco, who plays Noa, simply said, “AHHHH IM GONNA CRYYYYY.”

One thing’s for sure: This isn’t your mother’s — er, older sister’s — Pretty Little Liars. How are you feeling about the reboot? Click here for everything we know (so far), then drop a comment with your thoughts below.