Warning: This post contains spoilers from Power Book III Season 1, Episode 4. Read at your own risk.

Uncle Marvin’s mistakes on Power Book III: Raising Kanan jeopardize his life and the well-being of those around him.

Never was this more clear than in last week’s installment when masked men robbed Kanan after he left his nephew alone and unarmed in a stash house. One of the men, who was friends with Buck 20, held Kanan at gunpoint and was going to kill him until Uncle Marvin came to the rescue.

Viewers wondered why Marvin didn’t take all of the boxes of cash at once and why he didn’t act more strategically when attempting to stop the assailants in the van instead of crashing his Mercedes into them and shooting blindly. When Starz’s gritty ’90s gangster drama airs this Sunday at 8/7c, fans will learn how Raq punishes her older brother for losing part of the bag and needlessly putting her only son’s life at risk.

“My Uncle Horace is a lot like Marvin,” Curtis “50 Cent” Jackson, a Power universe executive producer and star, divulges to TVLine. “He’s the kind of person who can handle altercations and do aggressive things, but he gets in his own way. My Uncle Horace made a lot of crazy decisions and moves in business that still don’t make sense when I hear the stories.”

Jackson says he shared those tales with Power Book III creator Sascha Penn as they developed the prequel series and its characters.

“He’s been like that my entire life,” Jackson continues. “When talking about my uncle with Sascha, I told him about things I experienced with him and gave him a pretty clear canvas to paint the picture on. People don’t exactly know where pieces of these stories come from, you know? But they do come from my life. Uncle Horace wasn’t in all of the scenarios you see on the television, but he’s definitely on his own page.” 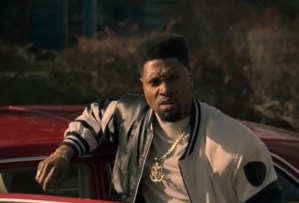 London Brown, who plays Marvin and is best known for his turn as Reggie on HBO’s Ballers, says he was drawn to the Power spinoff because of the writing.

“The script was very rich,” he says. “One thing that I look for when I get a script is how the dialogue flows. The dialogue lets me know where the writers are, but more so, how grounded the character is. I liked the fluidity of the dialogue off the top, and it’s a great story about family.”

Brown says growing up with a strong mother makes him appreciate fearless women leaders. Marvin, however, is less open-minded about his sister Raquel (Madam Secretary‘s Patina Miller) being the boss.

“He is a little bit insecure about having to be accountable to his younger sister Raq,” Brown shares. “But you’ll continue to see throughout the story that, ultimately, her position within this family does make sense. There are some issues that Marvin has to work out. Until he resolves his personal issues, it’s best that Raq runs things. He may not necessarily agree with that, but he’s still loyal and he still absolutely takes orders and holds it down.”

Best of all, Brown says he’s enjoying playing opposite Miller, who is a force of nature as Raq.

“She is so strong in her performance,” Brown admiringly concludes. “Because of that, I was able to find a place for Marvin to just humble himself, take orders and get things done.”