There is something liberating about the way Ms. Pat yells and curses at her husband, kids and sister on BET+’s new sitcom The Ms. Pat Show, which premiered Thursday.

Perhaps it is because behind all of that bluster, Ms. Pat truly loves her family, and swears at and harangues them only to show how much she cares. That’s what shines through in the Season 1 opener, giving stand-up comedian Patricia “Ms. Pat” Williams a larger platform to deliver her brand of bawdy humor to more people.

The installment opens with Ms. Pat performing onstage and kicking things off by calling her audience “motherf–kers.” She also asks the attendees if they’ve ever been shot before and adds that she has … twice. One of the incidents cost her a nipple, a detail she plays up with pleasure. The other time, Ms. Pat says, one of her baby’s fathers shot her in the back of her head. 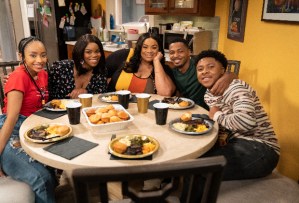 If this sounds too horrific to you, chances are The Ms. Pat Show isn’t for you. If you can laugh along with the Atlanta native, the jokes get better and more confident with every beat. The Ms. Pat Show is also unapologetically Black and relishes in moments such as Ms. Pat’s TV husband Terry singing along with Frankie Beverly’s “Before I Let Go” while making breakfast. But no subject or cow is too sacred, and Williams even jokingly calls the family reunion staple “barbecue music.”

Later in the episode, Ms. Pat has to deal with her teenage children’s angst and mishaps at school. Her son Junebug pretends to be promiscuous on social media in order to get likes. And when her daughter Janelle fistfights a classmate for making a racist comment, Junebug shamelessly records the rumble on his phone for online clout. 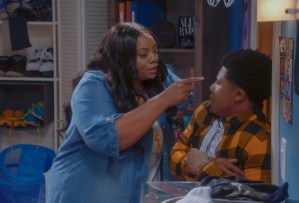 Both scenarios force Ms. Pat to deal with uncomfortable circumstances with humor and aplomb. She has to curse out the school principal, who assumes because she’s Black, she’s a single mother and she has to threaten her son, who is clueless about proper Internet etiquette. Ms. Pat also chides her 28-year-old son Brandon for living with her and playing video games all day, and her sister for not staying gainfully employed.

It’s the heart-to-heart chat that Ms. Pat has with Janelle about navigating predominately white spaces that feels the most authentic and touching. She urges her daughter, who prefers their Atlanta hometown to the Indiana town they now call home, to find the humor in everything despite being afraid of school shootings and racial bias.

Because that is what a loving mother does — curses, yells and makes everyone chuckle when they need it the most.

What did you think of The Ms. Pat Show series premiere and her blue humor and tough love? Grade the show in our poll and drop your thoughts in the comments.