Dr. Josh Skinner has a song in his heart — and he’s finally ready to sing it from the rooftops (or in this case, Schmigadoon!‘s town square).

In the sixth and final episode of the Apple TV+ comedy’s freshman run, Keegan-Michael Key‘s character realizes that he can’t cross that bridge back into reality with schoolmarm Emma Tate because he’s still very much in love with Melissa. And after spending the previous five episodes resisting every opportunity to burst into song, the musically averse Josh lets down his guard and tells Melissa exactly how he feels — in song.

“As soon as I knew what the show was going to be, and what the length of it was, it was very clear to me that the ending is Josh singing for the first time,” series co-creator Cinco Paul tells TVLine. “To do that, he had to very clearly state that he was not going to [sing throughout the show]. We also had to give him some opportunities where maybe he could, but he was going to reject it.

“To me, one of the things that is most moving is when someone says, ‘I’m never going to do this thing,’ and then they finally do it,” Paul explains. “I will tell you, at the table read, Cecily got so emotional. Real tears. And Keegan felt it, too. It was such a release [for him and for that character], to finally be able to sing and express his feelings.”

Key doesn’t deny any of what Paul says. In fact, he proudly admits that he was a mess during rehearsal.

“I was starting to get choked up before we even got to the song,” he recalls. “I was like, ‘OK, here we go,’ and I could hear sniffles down the table. I look over, and Cecily looks at me. I turn to her and say, ‘You know, Mel…,’ and she says ‘I love you,’ and she’s weeping. She’s [reciting] this monologue to me, and the music starts, and I go, ‘Oh no! I’m not going to make it!’ So I made a small announcement to the room while the musicians were vamping.”

In order to proceed, Key had to “just look at the words,” he says. “I couldn’t look at anybody at the table. That was the only way I could get through the song because it was so highly emotional.”

After Josh and Mel reconcile, the outsiders make their way to the bridge in hopes of returning to their former life in New York City. But Schmigadoon! cuts to black before they cross over — assuming they do cross over. Was that really the end? 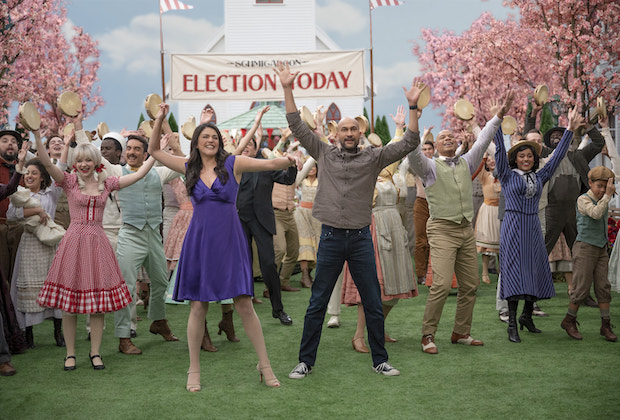 “I think it was by design that we don’t cross the bridge,” Key says, in regards to that last scene. “We get a palpable ending, which is to say [Melissa and Josh] have learned the lesson that Schmigadoon has presented to them, but there is more to this place that we haven’t explored. I know for a fact that Cinco has worked out a Season 2 in his mind, if we’re lucky enough to get a pick-up. The other thing I do know is that Melissa and Josh are [in it].”

Should Apple TV+ opt not to renew Schmigadoon!, Paul maintains that Season 1 is a complete story with a beginning, middle and end. “But it could continue,” he acknowledges. “There is more.”

What did you think of the Schmigadoon! finale — and of Season 1 overall? Would you like to see it return for Season 2? Weigh in below.