Arrow alum Stephen Amell will soon lace up his leather boots in the wrestling drama Heels, premiering this Sunday at 9/8c on Starz.

He stars as Jack Spade, a family man and wrestler with big dreams to expand the Duffy Wrestling League, which he inherited from his father, beyond its small-town roots. The show, which was created by Michael Waldron (Loki, Doctor Strange in the Multiverse of Madness), finds Amell performing many of his character’s impressive in-ring moves, including a coast-to-coast leap from the top rope you’ll see in the first episode.

It’s familiar territory for the actor who competed at WWE’s SummerSlam pay-per-view in 2015 and was even slammed through a table during a Ring of Honor match in 2017. According to Amell, his experience working alongside AEW’s Cody Rhodes over the years came in handy while making the series.

“It was just so fortunate that I had a background in this world, and that I understood it a little bit,” Amell tells TVLine. “Getting to essentially apprentice under someone like Cody Rhodes, who’s filling that same Jack Spade role in AEW, and certainly what he did for himself on the independent circuit prior to that, being able to draw on that was invaluable.”

Heels couldn’t be further from the Arrowverse — it’s a family drama about wrestlers, and there are no hooded vigilantes— but for Amell, the show feels a little familiar. “I kind of think of [Heels as] a superhero show,” he says. “They’ve got their superhero suits that just happen to be trunks and tights. You’ve got your theme music that you play when you come out, and you feel like a superhero. When you’re in that ring and people are cheering or booing, nothing else in your life really matters.” 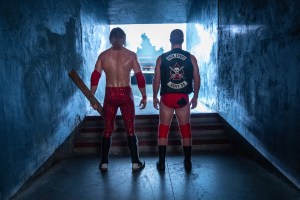 The series also stars Vikings veteran Alexander Ludwig as Jack’s younger brother Ace Spade, an arrogant young star with his sights set on the big leagues. Ludwig, who had no prior wrestling experience before signing onto the series, felt a huge responsibility to get it right for those who do wrestle for a living.

“There’s this immense pressure to do right by the people who have put their lives on the line for anything they do, and that’s how I felt with this show,” Ludwig explains. “You don’t need to know anything about wrestling to love this show, but Stephen and I wanted to do right by the wrestling community, and there was no faking it. For me, it was daunting.”

He and Amell trained with veteran wrestler Chavo Guerrero Jr. for several months before shooting to make those matches look seamless on film, which was easier said than done. “The first time I hit the ropes, and I’ll never forget that first bump I took… really rings your bell,” Ludwig recalls. “I’m gassed after five minutes, so I can’t imagine 40, but it was an incredible experience.”

In an effort to make the show as authentic as possible, Ludwig and Amell turned to their professional wrestler friends for advice and quick tips. “We would literally stop filming so I could text Adam Copeland [WWE’s Edge] or Stephen could text Cody Rhodes and just ask him, ‘Hey man, what do we do in this situation?'” Ludwig shares.

According to Amell, some of that sage advice included hashing out what happens when the bell rings and a wrestler has lost their match. “They either don’t move for, like, two minutes, or they immediately roll out of the ring [and] you never see them again,” he notes.