Who are all of these people? If that was your first reaction to the season premiere of The Challenge: Spies, Lies and Allies, you are far from alone, my friends.

Welcome to Season 37 of the long-running reality competition series, which has fully morphed into a worldwide phenomenon. Now including participants from overseas franchises like Big Brother Nigeria, Survivor: Romania, Too Hot to Handle UK and more, 19 rookie “agents” now outnumber the 15 returning vets, which include CT Tamburello, Aneesa Ferreira and Ashley “Millionaire” Mitchell, among others. (Click here for a full cast breakdown.)

What are the season’s new twists, and who was the first duo ousted from the game? Let’s recap!

WELCOME TO THE (WORST-NAMED) CHALLENGE! | At the top, the American agents are chained to huge cylinder blocks, while the international challengers are tasked with freeing them. This ultimately selects the duos for the season, which are:

Once free, the teams must carry a large safe to a decoding station. Using numbers that were on the bricks they just smashed, teams must open their safe with the right combination, grab the gemstone inside and hustle to the finish. Aneesa and Logan take the season’s first W, with Michaela and Renan coming in second, and Tori and Kelz coming in third. Ashley and Hughie come in dead last. 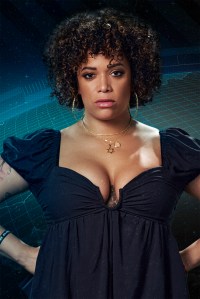 HOW DOES THE GAME WORK? | As the winners, Aneesa and Logan form “The Agency,” which keeps them safe from elimination and, of course, gives them power. The house will vote one team into elimination, and the winning pair will select the other competitors.

Back at the house, Michaela and Renan talk about forming a rookie alliance, but the veterans are well aware of the numbers. “If all the vets are not on the same page, it’s going to be a problem,” says Amanda. The vets make a truce not to vote for each other until all other options are exhausted. Let’s see how long that lasts.

SPIES, LIES AND GUYS | It doesn’t take long for romance to bloom. While Michele knows she has to focus on the game, she can’t help but set her sights on the boys, particularly Emmanuel. We also learn that Nelson and Ashley now live in the same city, and those two waste zero time getting flirty. Nany confides in Kyle about being interested in Kaycee, as we’re shown clips of the two ladies hugging and kissing. Fessy and Amanda lock lips, too, and from the looks of it, this is gonna be a very busy season.

Last season’s drama between Nelson and Fessy rears its head, and Nelson is clearly still pissed. He’s not letting his vendetta go, despite the fact that Fessy says he’s sorry and wishes he can take it back. It falls on mostly deaf ears, but Fessy still seems determined to make it up to him.

Meanwhile, no one seems to trust the Survivors in the house, because it’s assumed the former castaways have a good social game and will be adept at backstabbing. Rumors circulate that Michaela has a hit list of targets she wants to take out, which makes her the season’s first real enemy of the state. Seeing Michaela sink her own battleship makes Tommy and Michele (also former Survivor players) realize they need to lay loooow. 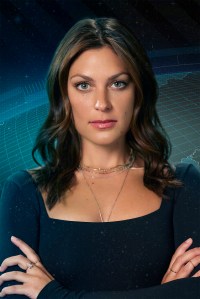 NOMINATIONS | During deliberation, Michaela throws Michele squarely under the bus… and then refuses to let her talk! Michele makes it crystal clear that she is not aligned with Michaela. Emy and Tommy then straight-up bury Michaela, confirming that the Survivor player was indeed targeting veteran Tori. When it comes time to vote, Michaela and Renan unsurprisingly become the season’s first “Compromised Agents.”

THE LAIR | TJ calls Michaela and Renan down to the sand and then tells Aneesa and Logan to throw another duo in… but there’s a twist. Instead of choosing one team to go down into battle, they can choose any man and woman they want! It’s a mix-and-match style elimination, which frankly, changes everything. Aneesa and Logan choose Corey L. and Michele to go into the face-off. (Michaela and Michele in elimination? My Survivor-loving heart is breaking here.)

The elimination is called “Back Me Up.” All four opponents are strapped together, with the goal of pushing each other off a ramp. It looks like a Twister game from hell. Limbs fly (and sprain), as all four players struggle to stay on the platform. The blob of humans eventually hits the ground, with Renan and Michaela falling first and losing the fight.

As the winners, Michele and Corey L. can either stay together as partners, go back with their original partners or infiltrate and steal any other player in the game except for The Agency. We’re then told that Nam had to leave the game (whaaat?) and that a replacement has been selected. (OK, this is a lot of information, Teej.) The new challenger is: Ed from The Circle!

Decisions are made: Michele steals Devin, while Corey L. steals Tori. Ed and Emy become a new duo, and lastly, Tracy and Kelz buddy up.

Will the veterans be able to maintain a season-long alliance? Grade the premiere below, then light up the Comments with your thoughts!