Ask anyone who has ever watched Lost, and they will tell you the “look both ways” cause of death is never easy to witness.

But when the title of a show is Hit & Run, the best thing you can do is brace yourself for visual impact. Adding to the wince factor is the fact that Danielle, the woman who dies after getting mowed down by a speeding BMW during the Netflix spy thriller’s premiere, gets hit over and over in the top-of-the-show recaps for most of the drama’s nine episodes.

Kaelen Ohm is the actress who plays Danielle, the inspiration behind Segev Azulay’s (Fauda star Lior Raz) vengeance after she is killed. At first, Segev thinks his past as an Israeli mercenary has caught up to him. But as the show goes on, it becomes clear Segev didn’t know his wife Danielle as well as he thought. 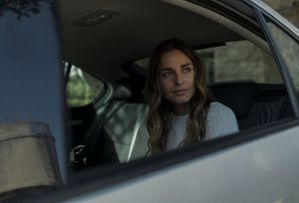 As for the titular hit-and-run scene, Ohm says shooting it was even harder than watching it.

“The interesting fact is we started shooting in 2020 in Israel before we were paused for COVID,” Ohm divulges to TVLine. “We did shoot that scene, and we did that stunt take 23 times. We were trying to get it in, but we had to walk away without completing it. And then we came back this year and did it all over again.”

Ohm, whose previous TV credits include the Lifetime television movie Flint, says every stunt and acting decision made the role and the series worthwhile.

“It’s good to be alive. But it was really kind of a life-changing experience as a person and as an actor to shoot that scene,” the Canadian thespian shares in earnest. “It’s hard to explain, but there were a lot of pieces that came together, and that really meant a lot to me. As difficult as it was for everybody, because of all of the moving parts, making it look believable mattered and really meant a lot.” 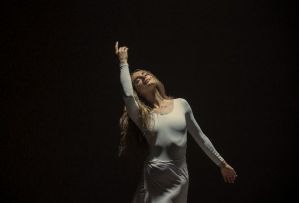 Attention to detail as well as the executive producers, whose pedigrees include Fauda (Raz and Avi Issacharoff) and The Killing (Dawn Prestwich and Nicole Yorkin), also beckoned Ohm to Hit & Run, she says.

“The show and the people behind the show drew me to the role,” Ohm adds, crediting “all of these incredible people who created shows that I have loved over the years. That, and the character being a dancer in another country that wasn’t her own. There are so many layers that drew me to the challenge and experience of playing Danielle.”