Fox welcomed viewers (back) to Fantasy Island on Tuesday for an hour of romance, intrigue and light cannibalism.

Though it’s touted as a reboot, this new version is actually a continuation of the original 1977 series, with Mr. Roarke’s descendant Elena (played by Roselyn Sanchez) now in charge of the mysterious island. Like her predecessor, Elena is responsible for bringing guests’ ultimate fantasies to life, helping them to grow in the process. But unlike the original Mr. Roarke, Elena is running things without a second in command. (More on that later.)

Tuesday’s premiere, like most episodes, told the stories of two separate visitors with very different outcomes. The first was Christine (played by Bellamy Young), an image-obsessed TV news anchor whose true desire was to finally be able to eat anything — or in some cases, everything — without gaining a single pound. But like all of the island’s unsuspecting guests, Christine soon discovered that her food issues connect to a much deeper pain. 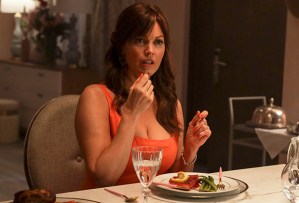 More specifically, they come from her verbally abusive stepfather Landon, who once told her not to eat too much cake because “no kid of mine is going to be a heifer.” So, how did Elena help Christine conquer her demons? By inviting her to a luau where she literally ate Landon like a roasted pig. And by “literally,” I mean figuratively. I hope.

Of course, Christine’s ordeal was merely an appetizer (sorry!) compared to the premiere’s other story, that of an old married couple named Mel and Ruby, the latter of whom is facing her final days. Seeking one last trip free of pain, Mel and Ruby were mysteriously transformed back into their younger selves, a gift they took full advantage of… mostly in the bedroom. During one particularly wild night of dancing and Elena-approved drug use, Ruby decided to get a tattoo, one that led to her stay on the island to work as Elena’s right-hand woman. Forever.

“One of the things we wanted to do for this series was to create a whole new mythology,” showrunner Sarah Fain explains to TVLine. “In our mythology, there is always a Roarke family member who is the custodian of the island, and that person always has a second. That second always has a very particular tattoo — which, yes, we took from the character Tattoo [from the original series]. It signifies their importance. The island chooses the person that’s the right person for that particular Roarke. Ruby is the right person for Elena, and we’ll see their relationship grow over the course of the season in a beautiful way.”

Adds showrunner Elizabeth Craft, “Because of things that happened in Elena’s past, she’s been a little more guarded and closed off,” which is why she hasn’t had a second until now. “The arrival of Ruby is really the inciting incident for Elena to start opening up and developing more relationships on the island.”

And if you’re eager to hear more about Elena’s connection to the original Mr. Roarke, you’re in luck. “She talks about him from time to time and remembers coming to the island as a child,” Fain says. “There’s a very cool story in Episode 8 that involves him and also another Roarke relative. We tease it out and dabble in the Roarke family history a little bit.”

Did you enjoy your maiden voyage to the new Fantasy Island? Weigh in via our polls below, then drop a comment with your full review.