Katie was down to her two final men on Monday’s finale of The Bachelorette — but would she even stick around to choose one of them?

Last week, she was in tears and ready to quit the show after she didn’t give frontrunner Greg the reassurance he needed, leading to him walking out on her. And as the (dramatic!) (three-hour!) finale opens, we get a preview of Katie calling Greg “a liar” on After the Final Rose and accusing him of “using” her for “acting practice” — so no, I don’t think they’re patching things up! After a pointless, time-filler season recap, we go back to Katie crying behind that bathroom door and talking about how “heartbreaking” Greg’s exit was. 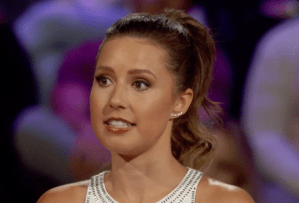 Suddenly, she’s doing a live interview with Tayshia and Kaitlyn and rehashing the Greg debacle, saying that it made her think she never really knew him at all: “I am literally on my f–king knees begging this man to stay, and he’s telling me it’s not good enough.” (Um, did that happen? Because if it did, we didn’t see it.) Katie also reveals that she hasn’t spoken to Greg since that day and recalls how he “talked down to” her: “That’s not a man.” Oh, Greg, I can already sense that this evening is not going to end well for you…

Back in New Mexico, Katie is catatonic in bed, still reeling from the Gregxit. She decides she needs “someone who’s going to trust her,” but she’s not sure she can move forward and give Blake and Justin a real chance. Speaking of those two, they get a visit from Tayshia and Kaitlyn, who tell them Greg has left and Katie is “emotionally devastated.” (No offense to you guys, though.) But their journeys will continue! Yay…? Katie meets Blake on an overnight date, and they let loose with a water balloon fight — but there’s a big old elephant in the room that needs addressing. She tells Blake the whole saga, including Michael’s departure, and admits she wanted to quit after Greg left. But she wants to keep going! He responds by saying “That’s a lot!” and then quickly makes out with her. He has some serious doubts, though. 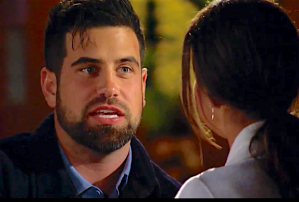 On their dinner date, Blake gives a big, long-winded speech that boils down to this: He loves her. (This guy who’s now on his third Bachelorette doesn’t “play games with love,” you see.) She wanted to wait until the end to say those words… but she goes ahead and tells him anyway: “I f–king love you so much.” (Oh! So now she can say it!) They feed each other cheesecake in the fantasy suite as Katie gushes that “I have not felt this happy in a long time.” Since Greg left, you mean? “What a turn of events!” Kaitlyn exclaims as we cut back to the live show. Uh, yeah, I’d say so!

Katie and Blake wake up in bed in the fantasy suite together and make schmoopy eyes at each other. “We want to walk away together at the end of this,” Katie announces. She also confesses to Kaitlyn that she was “plenty satisfied… many times” that night. She fell in love with Blake the moment she spilled all of her Greg heartbreak to him and he still wanted to keep going, she adds: “It was the best day of my life.” Oh right, she still has a date with Justin to get through. The poor guy is clueless as he prepares for their date, and it’s a bad sign when Katie doesn’t jump into his arms when he arrives and then adds the dreaded “Can we talk?” She sits him down and tells him how rough Greg’s departure was on her. She says she was excited to go on a date with him, but then adds, “However…” 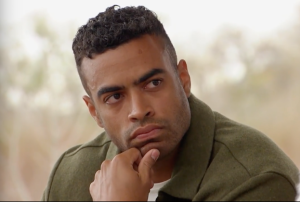 She tells him that during her date with Blake, she told him she’s “falling in love with him” — which isn’t even true! She said she f–king loves him so much! She can’t go through with bringing Justin to meet her family at this point, she says. Justin gets a little choked up and feels regret about opening up his heart to her like he did: “It’s not a fun place to be.” She reassures him that he’s a great guy who will make a great husband someday… just not hers! They hug it out, and she puts him into a SUV headed out of there. Justin breaks it all down for Tayshia and Kaitlyn on the live show before a reunion with Katie, and he seems like a nice enough guy — but c’mon, let’s be honest. These two had zero connection the whole season. And now we’re getting a montage of Justin’s goofy reaction shots? Let’s just get to the good stuff, i.e., the Greg stuff.

First, Blake has to meet Katie’s family… but there’s no tension, because he’s the only guy left! He meets her mom and her aunt Lindsey, who is “not affectionate at all… almost cold,” Katie warns. Lindsey is skeptical (understandably!) and presses Blake about “flunking out” with the last two Bachelorettes. (Go, Lindsey!) She and Katie’s mom both poke big holes in all of Blake’s rehearsed answers, and Katie strikes a weird note when she says it’ll be great when they’re apart for a month while Blake is in Africa for work (?). Plus, Blake doesn’t seem to be in any kind of rush to get engaged? But Katie’s mom sees that they’re happy together and decides that’s all that matters in the end. 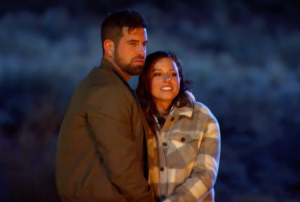 For their final date, Katie and Blake join energy healer Felicia to write down all their fears and insecurities and stuff them inside a giant vampire statue before setting fire to it to let them all go. They read their fears aloud to each other and then stuff them into a box and torch them as Katie proclaims that Blake is her “soulmate”: “I can’t picture my life without him.” Huh? Really? After you just begged another man to stay, like, less than 48 hours ago? Sorry, but this all just feels very forced. Not buying it, Katie! Blake also looks legitimately freaked out while browsing engagement rings with Tayshia, fretting that he feels “unsure” and “uneasy.” He looks like he ate a bad oyster and walks off for a moment alone. Not a good sign!

As Katie heads to the final rose ceremony, she has “zero doubts” that she’s getting engaged to Blake. Meanwhile, Tayshia is telling Blake if he’s not sure about proposing, “you need to let her go.” Uh-oh. Blake shows up at the ceremony and admits to Tayshia and Kaitlyn that he’s “freaking out,” but he barrels in anyway. He holds Katie’s hands as she spills her guts about how much she loves him: “You have made me the happiest woman alive.” He stumbles through his speech and scares her a bit by saying, “I can’t give you what you came here for… because you deserve a lot more than that.” Ooh, tricky! He gets down on one knee and pops the question — and she says yes! She gives him the final rose, and Tayshia and Kaitlyn rush over to congratulate the happy couple before they saddle up a pair of horses and ride off into the sunset. 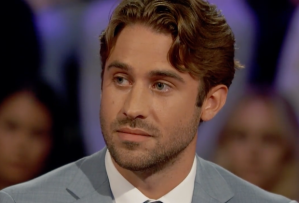 Back to the live show, where we clear up some “unfinished business” with Greg. He reiterates to Tayshia and Kaitlyn that “I was giving her my everything” and felt like he didn’t get anything back from Katie. He doesn’t have any regrets, though. Katie comes out and storms right past him without a hug, or even a look. Ouch. She doesn’t think he ever wanted to get engaged, and claims she gave him plenty of validation. She now feels like he was just looking for “the perfect opportunity to escape” and using her to get “the acting practice at my expense.” Katie explains that Greg has been to acting school, so she can’t truly know who he is. Bad news for all you actors out there! You can’t be trusted!

“You’re a liar,” Katie adds, “and if you think that’s love, you don’t know what love is.” She says he was “rude” and “gaslighting” her and basically just unloads on him, and he can only mumble out an apology before she piles on more and more. (When Kaitlyn interrupts to take a commercial break, Katie is like, “Please, take him!”) He counters that he felt like she was “playing the Bachelorette role with me” and withheld her emotions from him, but she still thinks he’s not being honest: “If you really loved me, that moment wouldn’t have pushed you away.” He does get some support from the crowd when he says, “I emptied my heart out to you… and all I got was just a pat on the back.” Her response is ice-cold: “When he left, so did everything I felt for him.” Greg tries to wish her well, and she responds with the least convincing utterance of “I wish you nothing but the best” ever captured on film. 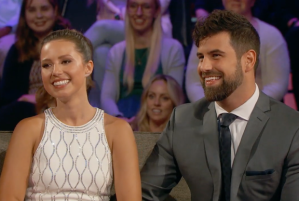 Blake comes out, and wow, they’re just so happy and in love, you guys! Katie never told her family she’s getting engaged, so they’re just finding out now. (Surprise, Aunt Lindsey!) Blake says their relationship “spiraled out of control… in the best way.” They recall his proposal fake-out, and Katie laughs that Blake is such “a prankster.” She’s happy that he freaked out so much… because it just shows how seriously he took it! (Side note: How weird is it that Tayshia is doing this interview, when Blake was just pursuing her less than a year ago?) Their interview ends with a bunch of dudes in the audience holding up boomboxes and playing that country song “Memorize You” they danced to before, and Katie bursts into tears as they share another slow dance. Then the whole thing ends with a Bachelor in Paradise promo… because Bachelor Nation marches on, no matter what!

Did Katie make the right call? Vote in our poll, and drop your finale thoughts in a comment below.