Reservation Dogs‘ lead character Bear gets by with a little help from his friends. He gets high with them, too, as they commit grand theft auto and rip off old ladies and grocery stores. Just another day living in the Oklahoman sticks.

In Taika Waititi and Sterlin Harjo’s new series (the first two episodes are now streaming on FX on Hulu), Bear and his pals do what they can to survive the streets they were born into. The kids plan to hustle and scheme their way to California by committing petty crimes (and a few felonies, too) with hopes of saving enough green to hightail it out of there. But as the zany comedy unravels, rival goons approach their turf, throwing a wrench into Bear and his pals’ big plan. Read on for a full recap of the first two installments.

The Stooges’ “I Wanna Be Your Dog” blares as we first meet Bear (Murdoch Mysteries‘ D’Pharaoh Woon-A-Tai) and his friends, which include Elora (American Gods‘ Devery Jacobs), Willie Jack (Paulina Alexis) and Cheese (Lane Factor). They’re about to lift a delivery truck, and as they peel out, sparks fly from the loading ramp as it drags on the ground behind them. They sell the stolen goods to a bunch of guys that look like a “meth-head zombie apocalypse” (according to Elora), making sure to negotiate for the truck’s precious cargo: boxes of chips.

As Bear records video for his Insta, we learn their friend Daniel passed away a year ago. “This place killed him,” he says. “That’s why we’re saving our money so we can leave this dump before it kills us, too.” The video turns out to be a project for school, and his teacher is stupefied. “I’m pretty sure some of that was illegal,” she says, rejecting Bear’s advances for a comically awkward hug.

The group hawks the stolen chips to local kids, trying to maximize their heist however possible. (What entrepreneurs!) However, a cop named Big (Fargo‘s Zahn McClarnon) is on to them. He knows all about the stolen truck, and he’s also investigating two car thefts from the week prior. Then there’s the stolen copper from street lamps, some steaks and a stash of edibles. Suffice it to say, these “dogs” have been busy. 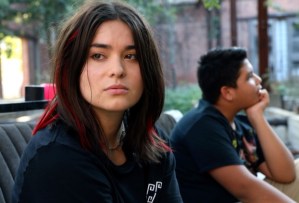 Elora guesstimates they can make it to California within a couple months based on the money they’ve made thus far. But a competing gang of slightly older thugs stands in their way, shooting the kids with paintballs as they walk down the street. After Bear takes a few hits, he sees a vision of a horse-riding Native American who tells him, “Being a warrior’s not always easy. You and your thuggy-ass friends… what are you doing for your people? It’s easy to be bad, but it’s hard to be a warrior with dignity.”

The other group is led by a blonde girl named Jackie who recently moved to the area to live near her cousins. Two locals, Mose and Mekko, told them that Bear and his crew were in a gang called the “Reservation Bandits” (which isn’t entirely true), and now, the cousins want to usurp their throne.

Later, the driver of the truck they stole enters the diner, and tells the clerk that he lost his job and his wife left him. Bear is feeling all sorts of guilty, knowing they turned this poor guy’s life upside down. He suggests they give the money back, but Elora isn’t having it. They got that money “fair and f–king square,” she says. Bear thinks maybe they’re the bad guys, but Elora’s eye is on the prize. Their town is evil, and she needs out.

The next day, Elora has a change of heart, and suggests they try to buy the truck back for half price, but the “meth-heads” already stripped it, suggesting they “turn the page, like Bob Seger.”

The gang dresses up in their finest suits to have a memorial for Daniel. They see the other gang drive by with a trunk full of copper. Looks like this turf war is officially on, but Bear isn’t gonna let his town go down like that. He vows to “protect this place.” The episode ends with Cheese asking if he can be Mr. Camoflauge, as they strut down the street like the Reservoir Dogs pack (an homage to the Quentin Tarantino classic, of course).

In Episode 2, Bear gets his ass handed to him by Jackie and her crew. He once again sees the Native American from his last vision, only this time, the ancestor is peeing behind a dumpster. He suggests that Bear’s plan to move west is equivalent to running away, but Bear doesn’t see it that way. The vision then tells him to go to the clinic because “your nose looks f–ked.” Now that’s sage advice.

The kids head to the health clinic to sell meat pies outside. (Again… that hustle? Respect.) While Bear and some of his crew get checked out, we see the ins and outs of the IHS (which stands for Indian Health Service) clinic. Outside, Jackie’s gang threatens even more violence, but luckily Officer Big is there to break things up. He grills Cheese about where he got the bag of chips he’s eating (which is so obviously the same brand that were previously stolen). Mose and Mekko chime in and help get him out of the tight spot, but these kids are gonna have to up their game if they want to keep evading Big and the law.

So what did you think of the Rez Dogs’ first couple adventures? Grade the premiere below, then hit the Comments!