With their new series Reservation Dogs, co-creators Taika Waititi and Sterlin Harjo are shining a light on what growing up in an Indigenous community is really like.

“One of the similarities in all of those Indigenous communities is humor,” said Harjo during a Television Critics Association press tour panel Wednesday.

Harjo (Mekko), a Seminole-Muscoge Native American who grew up in Tulsa, Okla., bonded with Waititi (What We Do In the Shadows), a Native Māori from New Zealand, over their shared experiences growing up in similar areas. “All of the stories [Taika and I] would tell were funny. They were never sad and depressing, which are the only stories that ever get told about Native people. So, when we were doing the show, it, from the beginning, was going to be a comedy.”

“Sterlin and I have known each other for many years,” Waititi recounted. “When we first met, we connected through sharing stories from when we were growing up. We know a lot of people from Indigenous communities… and all of those people share the same experiences.”

Reservation Dogs (which premieres Monday, Aug. 9, on FX on Hulu) follows four Native teenagers (played by D’Pharaoh Woon-A-Tai, Devery Jacobs, Paulina Alexis and Lane Factor) growing up in a rural Oklahoman reservation who “spend their days committing crime… and fighting it,” according to the synopsis. The series, as Harjo explained, was inspired by some of his favorite coming-of-age stories from childhood including The Goonies and Stand by Me, in addition to other pop culture relics like Quentin Tarantino’s Reservoir Dogs and the classic ’90s comedy Friday. It’s also jam-packed with references from Boyz n the Hood to movies that “no one will know,” such as Willow. 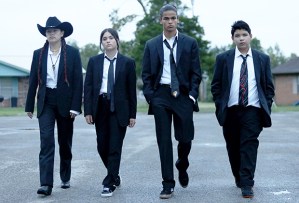 As the kids hustle and scheme to save enough money to move to California, all sorts of quirky characters stand in their way, from a rough-and-tough rival gang looking for trouble to a peculiar sheriff named Big (Fargo‘s Zahn McClarnon) who’s constantly nipping at their heels. These comical characters are not only a riot to watch, but provide much-needed representation for Native people, which could hopefully open doors for future Indigenous stories to be told.

In the same vein, the series also employs an all-Indigenous writers’ room.

“I consider this a comedy with some dramatic elements to it… and having an all‑Indigenous room helped us not be afraid to go hard and tell the truth, and also to be funny and push the envelope,” Harjo said. “We were able to pull from our own experiences and make it real.”

While Reservation Dogs hopes to show its audience what reservation life is really like, Harjo said he wanted to create something that was both entertaining and funny, using humor to subvert common tropes, while simultaneously drawing attention to similar stories. During the panel, he also commented on the importance of representation.

“For me, it’s about Native kids being able to watch this show and identify, and see themselves reflected on the screen, something that none of us grew up having,” he said. “It’s important to feel seen, and it’s important to see yourself reflected. It’s going to be different, but there’s a lot of universal truths that not just Native people can identify with in this show.”

The panel also discussed the significance of the ghost that Woon-A-Tai’s character, Bear, sees throughout. The ancestor looks like a stereotypical image one might think of when imagining a Native American, with his traditional garb and feathers in his hair, only this guy’s horse-riding skills are less than stellar and he sometimes pees behind dumpsters. The wisdom he imparts on the youngster is questionable at best.

“It’s letting non‑Natives into the room and going, ‘Look what you thought we were,'” said Harjo. “But it’s actually kind of honoring our past, too, because we actually were like that at one point. So it’s poking fun at the stereotype, but also acknowledging the truths in that.”