At last, Sunday’s Animal Kingdom revealed the fate of Emily Deschanel’s Angela: She wasn’t merely gone, she was a goner. (Our detailed recap has the whole story of what went down.) Here to share with TVLine why the Bones alum didn’t return for the TNT drama’s penultimate season — and to weigh in Craig’s ill-advised hookup — is showrunner Daniele Nathanson.

TVLINE | First things first, what went into the decision to kill off Angela?
Ultimately, we wanted to keep tying everything back to Smurf. And Emily Deschanel is a great actress, but she was never intended to pick up that Smurf energy. No matter how many pies Angela baked, it wasn’t going to happen. [Laughs] And the only person Angela really connected with was Pope. So after Smurf died, that loss had to come to the fore. The story had to be about his relationship with his mother, even though she’s dead. So it was a one-season arc. Plus, Emily Deschanel is a very successful actress. She had things to do. 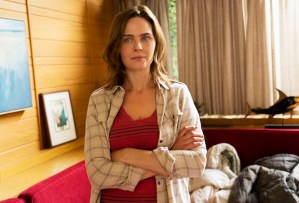 TVLINE | I was surprised that Pope managed to stop himself from killing the guy he blamed for Angela’s death.
Well, we could see from Episode 1 this season, with the fact that he didn’t kill his cousin, that he’s trying to change. That’s a lot of what the season is about for him. If he doesn’t have to do things Smurf’s way, what is his way? Can he make his own decisions? And on top of that, it wasn’t so direct. This guy didn’t kill [Angela necessarily… he just didn’t save her]. So Pope made sure that he knew what was up. And who knows? He may have died. Pope left him in the surf.

TVLINE | It seemed like the beating ended up having as much to do with Smurf not having helped Julia as Shane not having helped Angela — like it was a real epiphany for Pope.
Exactly. And that’s what a lot of this season is. When I thought about themes for Season 5, it was sort of boys to men, meaning that [the Codys] had been sort of infantilized by Smurf, and now she’s not around, so they have to become themselves. And this is another thing with narcissistic parents like her. It leaves the kids asking where the parent ends and they begin. 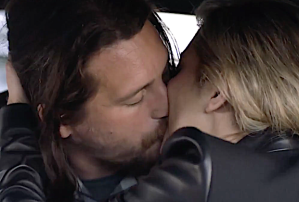 TVLINE | I’ve gotta ask: WTF is Craig thinking making out with Frankie? Renn’s gonna put a cap in his ass!
Well, he feels bad. Remember, in Season 4, he and the boys burned her contact, which hurt her business. Plus, in the past, it was Smurf who found jobs for the guys. Now they have to do it for themselves, so you don’t want to cut off anybody who could provide a job to you, as Frankie clearly can. And it’s Animal Kingdom — hooking up and sex can be casual. And you know, Craig and Renn haven’t had a conversation about whether they’re monogamous. It’s not a very Animal Kingdom conversation to have. So we just felt that that moment was within the world of the show. And also, Craig is an animal who lives a certain way. Sometimes you just can’t stop it.