AFC Richmond takes a knee (so to speak) during Friday’s Ted Lasso, as the players band together in support of rising star Sam Obisanya.

At the start of “Do the Right-est Thing,” Sam is elated to be the face of Richmond’s chief sponsor, Dubai Air. But as soon as his father brings to light the crimes carried out by Dubai Air’s parent company Cerithium Oil — a mega conglomerate that has been destroying Sam’s homeland of Nigeria with countless oil spills, and bribing government officials to look the other way — Sam is determined to get out of the deal. Rebecca assures him that she’ll take care of it, but it’s easier said than done.

Cerithium CEO Richard Cole, who just so happens to be an old friend of Rupert’s, wants Rebecca to sack Sam before this goes any further. But being the “boss ass bitch” that she is, Rebecca fires off an email — with the help of her trusty, 13-year-old sidekick, Sassy’s daughter Nora — telling Richard that she will not be getting rid of Sam any time soon. 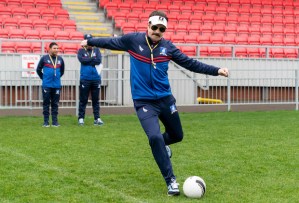 Episode 3 also focuses on Jamie’s halfhearted attempts to get back in his teammates’ good graces. Before the Lust Conquers All alum has a chance to buy the players’ affection by gifting them each their own PlayStation 5, Ted “breaks glass” and unleashes Led Tasso, his cartoonishly evil alter ego. In doing so, Led—err, Ted, hopes to turn the team against him rather than Jamie — and to his credit, it does help some, affording Jamie an opportunity to speak out against the coach’s Jekyll-and-Hyde act, on behalf of his fellow footballers. It’s still not enough, though.

The two storylines converge ahead of Richmond’s latest match. In the locker room, Sam takes a good, hard look in the mirror and realizes he can’t keep playing with Dubai Air’s logo adorned to his chest. He picks up a roll of athletic tape and covers it. His fellow Nigerian players follow suit, but the others do not — not until Jamie stands up and asks Isaac to throw him the tape. “We’re a team, ain’t we?” Jamie says to Sam. “Gotta wear the same kit.” And once Jamie does it, so does everyone else on the team.

Out on the pitch, Richmond’s players remove their jackets to reveal their modded uniforms, creating an instant media frenzy. Richard rings Rebecca, but she sends him to voicemail. Again, like a “boss ass bitch.” 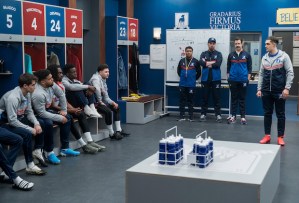 Later at a press conference, Ted is asked if he knew what was going to transpire out on the pitch. He did not. But he tells the press that what Sam did out there was courageous. Being an affluent white male, Ted has never needed to show that kind of courage — “because honestly, when bad things happen to people like me, you people have a tendency to write about it without being asked,” the coach remarks. “Sam had to go and get y’all’s attention.”

Rather than answer any more questions, he turns the mic over to the player responsible for the brouhaha. Sam relishes the opportunity, but refuses to answer any questions about the game his team just lost. “I’m here to ask the Nigerian government to put an end to decades of environmental destruction by Cerithium Oil — destruction that the Powers That Be have turned a blind eye to for far too long,” he says, openly accusing his home country’s government of corruption.

On the walk back to the locker room, Ted applauds Sam’s efforts, and tells the up-and-coming footballer that “doing the right thing is never the wrong thing.” Coach then opens the door to reveal the entire team gathered to toast Sam, as well as an end to their eight-game tie streak.

What did you think of Ted Lasso Season 2, Episode 3?