You don’t have to be a Lior Raz fan to get into his new Netflix geopolitical spy thriller Hit & Run. But it helps.

Raz, who grabbed international attention as the star of the Israeli espionage drama Fauda, is back to make fans’ hearts race again with his new offering, which started streaming Friday.

Hit & Run follows Raz’s character Segev Azulay, a family man and tour guide living in Tel Aviv. Everything falls apart when Segev’s wife Danielle, an American dancer, is violently and suddenly killed in a hit-and-run accident on her way to catch a plane to New York for an audition.

Stricken by grief, Segev doesn’t know who he wants to punch or kill. He just knows that he needs answers, and ultimately revenge against the man behind the wheel. Making matters murky, Segev used to be an Israeli mercenary, and he’s afraid that someone from his past killed Danielle in retaliation. His theory feels especially plausible when a masked man breaks into his place after Danielle’s funeral and attempts to kill him.

Segev, being the perfect blend of Bruce Willis and Michael Chiklis, handily kills the man, but who is he? And what’s up with Assaf, the mystery man Danielle used to date before she married Segev? It seemed like he might have had her killed because of the way he was low-key stalking her. But when Segev called his phone to see who had been phoning and texting Danielle, dude really didn’t know she was deceased. 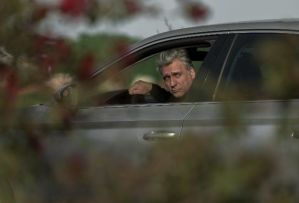 Whatever the case, the series opens with Segev in a New York jail cell, so obviously the mystery takes him to America, where he quickly fits in. For instance, the way he killed that bad guy and then collected his daughter from upstairs to take her to his ex-wife’s place was nothing short of enthralling and cowboy-like.

The downside is that after Segev got back from dropping off Ella at her mom’s, the body of the baddie was gone, and suddenly, Segev seemed crazy, like he imagined the whole thing. But of course, he didn’t. The good news is that Segev has his cop cousin Tali, who is also a badass, in spite of the fact that (or maybe especially because) she’s pregnant. Here’s hoping she can help Segev get to the bottom of this mess as well.

What did you think of the premiere of Hit & Run, and did you wince as much as we did when that car mowed down Danielle? Grade the series opener in our trusty poll, and drop your thoughts in the comments.