Mildred Layton’s mayoral campaign begins in song, as Kristin Chenoweth‘s persnickety alter ego declares that “strife and tribulation” have plagued her beloved town of Schmigadoon! in the penultimate episode of the Apple TV+ comedy.

Mildred’s rallying cry comes in the form of an original show tune inspired by The Music Man‘s “You’ve Got Trouble” — and it’s quite a mouthful, which Chenoweth memorized over eight or nine days in self-isolation (during a mandated 14-day quarantine ahead of production).

And that was important, since she had very little time to rehearse the performance. It also happened to be the “last thing I shot,” Chenoweth recalls — and it was Thanksgiving Day.  “We mapped it out [over two hours], then we shot it… I was like, ‘This is your chance, Kristin. This is what you do.'” But it was a vastly different experience than she’s previously had on Broadway, where you “rehearse a ton” in the lead-up to the production. 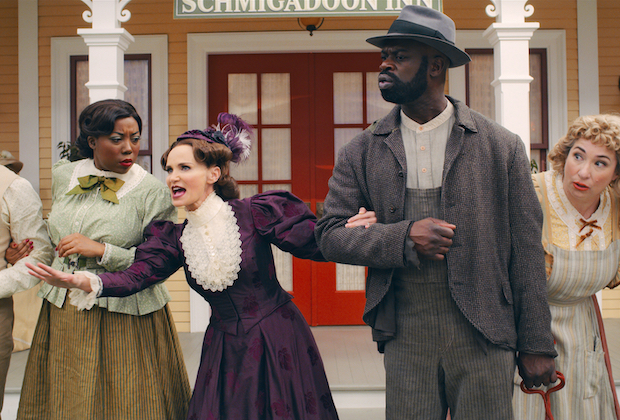 “I was worried,” Chenoweth admits. “I was up and down that set, and I didn’t want the people lifting me getting hurt. I’m a God person, and I prayed. I got down on my hands and knees and I said, ‘Jesus, take the wheel, OK? Take the wheel!’ And [our director Barry] Sonnenfeld, he’s not even a praying person, but I think even he prayed to Jesus.”

Without hesitation, Sonnenfeld — who had previously worked with Chenoweth on numerous projects, including cult classic Pushing Daisies —  admits that he was nervous for this particular number. After all, “Tribulation” was to be shot without a single cut, with the camera following Chenoweth the entire time.

“That song scared me the most,” he says. “If at three minutes and 28 seconds somebody messed up, we’d have to start at the beginning again. And the song ends — after us following [Chenoweth] around all four quadrants of the world of Schmigadoon on this big soundstage — with a physical effect of a banner coming down from the ceiling and balloons being dropped. Each take I was going, ‘Oh, no! This is good! Are we going to mess it up in the last five seconds? What if the balloons don’t land?'” 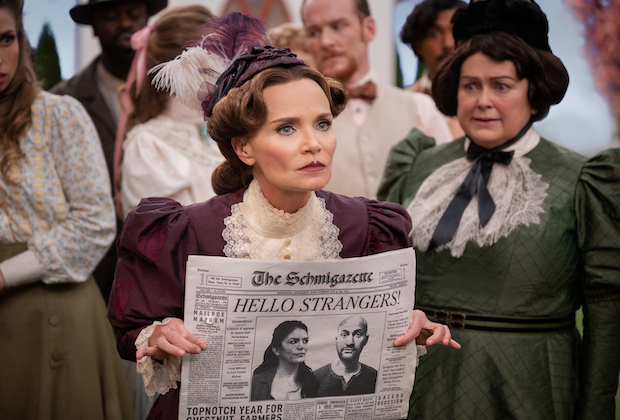 When it actually came time to film, “Chenoweth had to do this dance with the steadicam operator [Jim van Dijk],” Sonnenfeld explains. “They had to be so in tune with each other.” Additionally, Chenoweth had to make sure that she remained on pitch, with executive producer Cinco Paul determined to use as much live performance as possible, rather than rely on a “safe vocal take” recorded in studio, ahead of time.

“What was hard is that I had to sing it live, but also with myself for backup, in case something went wrong with the sound,” Chenoweth explains. “So I’m like, ‘You’re asking me to lip-sync “Tribulation,” but also sing it live?’ I have vertigo sometimes, and it was like vertigo of lyrics. I finally went, ‘Kristin, don’t get in your head. This is your Olympics, and you’re going to do it,’ and I did it.”

But make no mistake, she says, “If I hadn’t had the ensemble of people, of actors and artists that I had with me, I don’t know that it would’ve been so successful.” (Per Sonnenfeld, they needed only “three takes” to get it down pat.) Once they called cut, “I said, ‘Thanks, Barry,’ and then I got on a plane, flew to Oklahoma and had midnight Thanksgiving.” And that was that.