Sanaa Lathan has played everything from a hard-boiled DOJ detective to an alien slayer, during her illustrious quarter-of-a-century career. And thanks to her upcoming role on Netflix’s geopolitical spy thriller Hit & Run, she can add Black Jewish journalist to that list.

The drama, headlined by Fauda star Lior Raz, premieres this Friday and follows Segev Azulay, a former Israeli mercenary turned family man who is thrust back into the world of espionage when his wife’s violent death unearths a world full of mysteries, secrets and lies. Lathan co-stars as Naomi Hicks, an old fling from Segev’s past and a dogged investigative reporter who helps him find the facts he seeks halfway around the world in New York. Naomi also has an ambitious agenda of her own.

Lathan says she was drawn to Hit & Run because the series is a departure from other roles she has played — and because it is unlike anything on television. 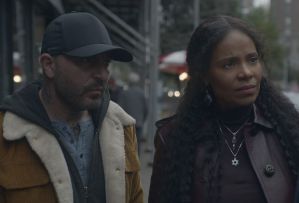 “They came to me with a good idea of Naomi and brought up the fact that she was a Black Jewish woman, and I was like, ‘Let’s talk about that,'” Lathan recalls for TVLine. “I love that because you don’t really see that. There are so many Black Jewish people all over the world. It’s just who she is.”

Although the drama doesn’t deep dive into Naomi’s religious background, there is room to do so if the series returns for additional seasons.

“Maybe in the future, the writers can delve into it,” Lathan pontificates. “I talked to a woman named Yavilah McCoy, a third-generation African-American Jew, who is really down for Black causes. But she’s also really steeped in her religion and culture, and is an advocate who really tries to educate others on the fact that Jewish people are all different races. I thought that was an interesting layer.”

While Naomi’s career aspirations and thirst for the truth put her in compromising and life-threatening situations on Hit & Run, Lathan says she understands her motivations. Hopefully, as Season 1 unfolds, viewers will, too.

“She’s passionate about her job, but Naomi is also at a time in her life where she’s feeling stagnate in her marriage and her career,” Lathan shares. “She needs something more. And even though it’s maybe not the smartest thing for her to get involved in, she does. She has to go after this story.”