Freeform’s grown-ish has never shied away from hot-button social issues. And when Episode 5, titled “A Boy Is a Gun,” aired this Thursday, the collegiate comedy tackled white people shooting and killing unarmed Black people.

The installment opens with Doug innocently jogging around his Southern California neighborhood (mirroring in rather eerie ways the crimeless actions of Ahmaud Arbery). Doug stops by a store to buy something cold and refreshing to quench his thirst, and suddenly, a parallel reality is shown as Kendrick Lamar’s “Pride” serenades him through his earbuds.

At the end of his purchase, Doug chugs his sports drink and jogs away. But thousands of miles away in Virginia around the same time, two white police officers shoot and kill a weaponless Black man named Marcus Jennings after he buys a sports drink and pulls out his wallet to identify himself.

All of Doug’s friends and everyone in his social-media orbit hashtags the injustice of Marcus’ slaughter. Doug, however, chooses to act apathetically and even goes so far as to throw an income-generating party with Luca, as if nothing has happened out of the ordinary. Luca’s sister Kiki confronts Doug about his indifference and seeming lack of awareness. She even mockingly says cheese and wine is the new “good trouble.” In response, Doug refuses to cave and says Marcus’ death is just another shooting of a powerless Black man in America that is beyond his control.

The party goes on as planned, but in an act of defiance, Kiki, who is supposed to be collecting money at the door, lets guests in for free if they sign a petition to bring the cops who killed Marcus to justice. When Doug finds out about Kiki’s un-capitalistic ways, he yells at her, and she yells back and calls him a “bad Black person.” 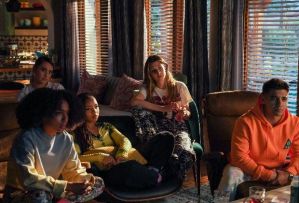 Everyone within earshot, regardless of race, winces at the insult. It also sparks a debate on what makes someone a good or bad Black person and how social-media hashtags simply aren’t enough to end police brutality against Black men, women and children. The discourse gets interrupted when an alert informs the group that the police officers who claimed Marcus’ life had been skirting charges and collecting their regular salaries.

Kiki concedes that Doug had been right after all and walks off, but the victory stings, and Doug later meets up with her to tearfully apologize. He says his despondency is a coping mechanism because college degrees and respectability politics do little to protect the lives of Black people from the police. And the two wind up sharing their first kiss.

The romantic bliss is short-lived when Doug, Kiki, Zoey, Aaron and the rest of the crew learn the heartbreaking news that police officers in another city have killed an innocent and unarmed Black boy on his way to school. The episode ends with Doug taking a stand and deciding to protest and is followed by a sobering scroll of the names of George Floyd, Breonna Taylor and dozens of other human beings whose only crime was being born Black.

What did you think of the latest installment of grown-ish? Are you pleased with the way the show addressed the Black Lives Matter movement and America’s racial reckoning? Drop your thoughts in the comments.