If there’s one thing I know about Gen Z, it’s that those kids go crazy for Bette Midler, so it’s only fitting that the Gossip Girl reboot’s first Halloween episode took place at Midler’s annual charity costume party. It was an hour loaded with tricks and treats, including (gasp!) the first appearance by a cast member from the original CW series.

As part of Julien’s desperate quest to convince the world that she and Zoya really are friends, she vowed to win this year’s costume contest as a duo. Not even a thwarted shooting at a neighboring school could take her eyes of the prize. In fact, Julien became even more determined to blow her social media rivals — Pippa and Bianca, naturally — out of the water when she realized that they might garner sympathy votes to offset the trauma of surviving the non-shooting. (I know we’re supposed to like Julien, but that’s monster-person logic right there.)

Zoya came up with the brilliant idea of attending as Beyoncé and Solange — specifically from the infamous elevator footage of Solange going full Lemonade on Jay-Z — only to discover upon arriving that someone leaked their idea, resulting in a party with Beyoncés and Solanges as far as the eye could see. (Honestly, dream party.) To make matters worse, Julien’s nemeses showed up dressed like “New York icons” Blair and Serena, prompting Julien and Zoya to steal Obie and Aki’s suits in order to pose as Chuck and Dan. Hey, if you can’t beat ’em, you might as well pretend to join ’em!

And because it wouldn’t be Halloween without an unmasking, Luna discovered that Julien and Zoya’s costume idea was leaked by — wait for it — Monet! Apparently she’s tired of Julien “wasting her power” on her friendship with Zoya. No one signed on any dotted lines, but it’s safe to say that Julien and Monet’s working relationship is dunzo.

Also worth discussing from Episode 5… 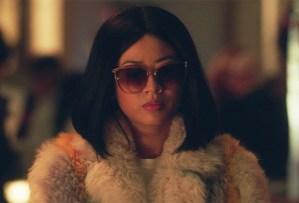 * As mentioned earlier, this week’s episode welcomed the first original Gossip Girl cast member, though it was neither who nor how you probably expected. After digging some dirt on Zoya’s new “friend” Simon, Obie learned that he was actually a New York Magazine reporter who intended to expose Z as GG. And who does this sleaze ball work for? Why, none other than Nelly Yuki (once again played by Yin Chang). But Nelly knows all too well the toll that Gossip Girl can take on a person, so she didn’t appreciate Obie inviting her to the Halloween party simply to expose Simon. “This kind of drama is exactly what Gossip Girl wants,” she told him. “If you stoop to her level, Mr. Bergman, you’re no better than her.”

* Aki may be hopelessly neutral in his own relationship, but he’s decided to take an active — and actively foolish — role in Max’s affair with Rafa. Loudly confronting Max about it in the hallway? Dumb. Confronting Rafa about it in public? Also dumb. Don’t get me wrong, I think it’s lovely that he with the Nurse Joy-colored hair cares enough about his friend to intervene, but can you really say that Max would do the same for him? Or anyone? At the very least, not getting involved would have saved Aki that heinously awkward phone conversation with Max’s father, whose hobbies are now limited to weeping and listening to sad opera.

* While we’re discussing that mess, does anyone else have whiplash from how quickly Rafa became the villain this week? I understand him getting hostile with Aki for threatening to expose his affair with Max — not that they’ve been doing much to hide it, given that they literally hook up in his classroom with the door wide open — but even Max was turning on the serial student banger by the end of the hour. It’s almost like you can’t trust a guy in a Sleep No More mask!

* I want to sympathize with Audrey over potentially having to move. I really do. But as a native of the Constitution State, I’m going to need a formal apology for her claim that “Connecticut only exists to create land mass between Boston and New York.” Until then, no sympathy. (That said, when she found out her mother was in the hospital, I was very concerned. For Laura Benanti.)

* Coco Chanel once said, “Before you leave the house, look in the mirror and take one thing off.” I feel the same applies to TV shows with too many plots. And in this case, I would definitely take off whatever is happening (or not happening) between Kate and Jordan.

Your thoughts on this week’s Gossip Girl? Drop ’em in a comment below.