Da Jeong’s strange attraction to Ian Chase became much more palpable in Episode 10 of Netflix’s K-drama You Are My Spring.

The focus sharpened when a random man off the street attempted to eat free at the hotel where Da Jeong works by pretending to be a guest. A hotel employee confronted the man, and the man pulled a knife on the employee. Da Jeong and her colleagues attempted to de-escalate the situation, but tensions mounted until Ian stepped in and grabbed the man’s knife by the blade with his bare left hand and stared him down.

Shocked and confused by Ian and his sacrificial bloody hand, the man let go of the knife, and authorities took him away. Da Jeong then helped Ian bandage his hand while observing him with an infatuated blend of quizzical astonishment and growing concern. Slightly annoyed by her gaze, Ian nonchalantly wrapped his hand, saying he was right-handed, and asked Da Jeong if she was still afraid of him. 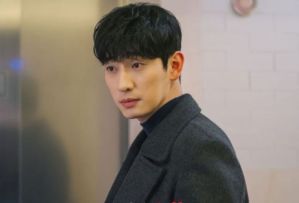 When Da Jeong didn’t answer, Ian stood up and backed her against a wall. And there it was — Da Jeong demurred at Ian’s dangerous posturing and intensity, but it was unclear if she was attracted to Ian or the ghost of Chae.

Once again, Ian asked her if she was afraid of him, and this time, the words finally came out. Da Jeong said she was afraid of him and asked Ian to step aside. But he didn’t. Instead, he blocked her path with his right hand and then his left and moved in closer as if he were going to kiss her.

A whispered insult followed in lieu of a kiss, and Ian said that Da Jeong was a fool who was confused because Chae, his deceased twin brother, was the one she was afraid of, not him. Ian walked away, and a speechless and breathless Da Jeong stood by the wall and tried to gather her thoughts and herself. 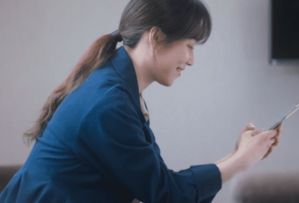 Da Jeong may be attracted to Ian’s bad-boy ways, but it’s a good thing they parted ways when they did. This dude is working with some rather nefarious people, and although they beat up his homeless stalker for him, it appears that they — or the homeless stalker — drugged him and framed him for murder. Yikes!

On a happier note, Da Jeong and Young Do have a love connection that continues to flourish. They’ve been texting each other nonstop, and they even went camping with their friends. Young Do bought Da Jeong a pretty necklace that she cherished, and they had candid and vulnerable conversations about childhood wounds and disappointments. Let’s see bad-boy Ian do that.

Do you think Ian is guilty of murder, or do you think he was framed on the latest You Are My Spring? And are you breathlessly anticipating Da Jeong and Young Do’s next hot and heavy kiss? Drop your thoughts in the comments.