Bad days are coming for the Bordelons in OWN’s new Season 6 trailer for Queen Sugar.

The cabler dropped the official trailer Tuesday as well as the premiere date: Tuesday, Sept. 7 at 8/7c. A mask-less, post-pandemic world stands out in the highlight reel, and so does Hollywood’s toast with Ralph Angel and Prosper in which he says, “Here’s to not letting the bad days get the best of us.” Sadly, some of the darkness that awaits the men and the ones they love is shown soon after.

This includes Ralph Angel and Darla, who are happily expecting a baby, possibly losing the farm and Ralph Angel entertaining a life of crime to prevent that loss. Nova appears to have moved beyond Calvin (yikes!). However, it’s unclear if they are broken up or on a break, assuming that Calvin is in prison for what he did to a Black suspect when he was a rookie cop. In one scene, she’s beaming at compliments a handsome new stranger pays her. There’s also a threatening photo of her with a target drawn around her face — perhaps in response to her relationship with Calvin. 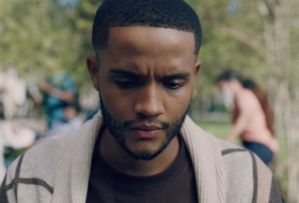 Charley and Davis have reunited in some fashion, but she’s also keeping their reunion a secret from Aunt Vi and wearing large hats to hide her identity. Plus, both Aunt Vi and Charley can be seen giving stank-face expressions to their nemesis Parker. Meanwhile, Micah seems to be suffering from a fugue state of sorts or PTSD while away at college.

Are you excited and nervous about the Season 6 premiere of Queen Sugar, and what kind of crime do you think Ralph Angel might commit? Drop your thoughts in the comments.