For fans of Tyler Perry’s Sistas who are #TeamSabrina when it comes to Jacobi’s impending sexual harassment case, you might want to rethink that alliance. Novi Brown, the actress who plays Sabrina, says her character isn’t without blame.

In case you’ve been too wrapped up in all things Gary and Andi to notice, Sabrina is going through some things on the BET nighttime soap, which airs Wednesdays at 8/7c. The trouble started when her ex-boo Calvin came to the bank and asked her to do him a favor regarding his account that she couldn’t do without a police report and authorization.

When Calvin didn’t get his way, he grabbed Sabrina’s arm and her subordinate Jacobi (Skyh Alvester Black) — who she kind of had a fling with — stepped in to defend Sabrina and ended up knocking Calvin out cold. Sabrina had to suspend Jacobi for the punch and later, per her boss’ request, had to fire Jacobi. Now, out of revenge, Jacobi is suing Sabrina and the bank for sexual harassment.

“When you’re single, you have to date responsibly,” Brown said in a recent Instagram Live chat she did with her costar Black. “Sabrina was irresponsible in what she was doing and her lack of empathy. Jacobi shouldn’t have been fighting on the job. But it’s not like it happened out of nowhere. Those two adults both crossed a line, and they continue crossing the line.” 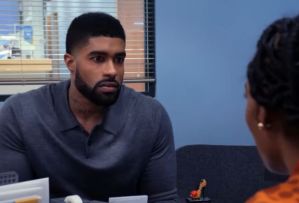 When Sistas airs this week, Brown and Black said fans will get a better sense of what is going on with Sabrina and Jacobi. Making matters a little more spicy, Sabrina is flirting with the idea of dating a male stripper named El Fuego, with whom she attended college.

“Sabrina said Jacobi came on to her, but she’s a grown woman,” Brown added. “This is about Sabrina’s emotional responsibility and a lack of restraint on both of their parts. There’s a conversation about workplace fraternization, but I think it goes deeper than that. Jacobi is projecting his hurt, and we’ve all done that.”

This is all a part of Jacobi’s misplaced anger, Black added.

“He’s hurt,” said the Miami native and former dancer. “My job as an actor is to find out why, and it’s because Jacobi’s mom left. He got abandoned by this other woman that he actually likes, and that was a trigger.”

Jacobi also thinks that embarrassing and hurting Sabrina — and maybe even getting her fired — will put him back in the driver’s seat in his life. “This woman hurt him, and he needs to get his power back,” Black concluded. “But what he doesn’t realize is that it’s OK not to be OK.”