“Leslie has left the villa.”

Those five words from Love Island‘s narrator, delivered during Sunday night’s telecast over a sunrise montage, represented the sum total of the CBS series’ explanation for the sudden, off-camera exit of newish arrival Leslie Golden.

A self-described pansexual, Leslie joined the mix on Day 18 (in the July 25 episode), when the current “girls” relocated to Casa Amor to meet a fresh batch of fellas and the “boys” stayed at the villa to be tempted by newcomers Leslie, Genny, Flo, Isabel and Kay.

Leslie was last heard from in the July 30 episode (where she got pulled into a quarrel between Philly friends Shannon and Genny), and she last was glimpsed during this Sunday’s “who slept in whose bed” opening montage — shortly after which narrator Matthew casually mentioned her departure.

Those who dive deeper into the “dating” competition via the Love Island app already has some sense that Leslie’s fate was in flux when she was not offered as an option in a “Vote for Your Favorite Islander” poll that went up after Friday’s telecast. 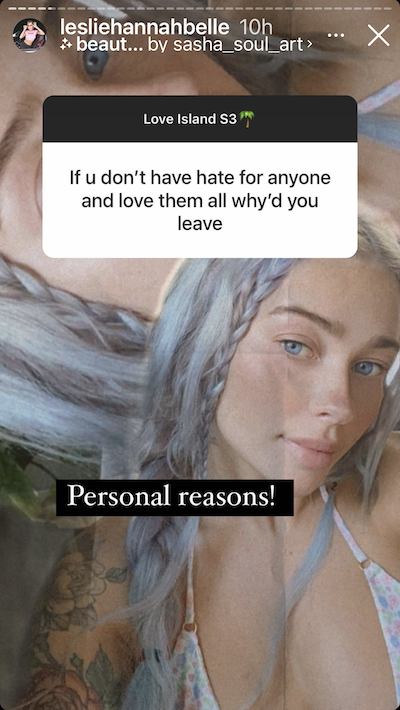 Golden, in one of those “ask me a question” thingies on Instagram, fielded many questions on Sunday night about her truncated Love Island stay, claiming that she walked away from the show for “personal reasons.”

Pressed to dish some details, the Texan insisted her exit was “completely unrelated to the drama” that unfolded on Friday night, when she and Genny were called out for their behavior and wardrobe choices on social media. “I know how it seems, but I have no beef with anyone there.”

“Really, it’s not that deep,” she told another follower. “[My exit] has absolutely nothing to do with anyone in thee villa, I pinky swear.

“I know I appeared like I’m drama, but that’s not just my vibe,” she said.

TVLine has reached out to CBS for comment on Leslie’s departure from the series. UPDATE: But on Monday afternoon, Golden shared in a new Instagram story, “I would love to say [why I had to leave], I think it’s hilarious. I think it’s a really dumb reason. Again, very on-brand for me however. What I did was a little illegal.”

As for the show barely accounting for her abrupt absence, “I honestly have no idea why they did that,” she shrugged. “Maybe not to pull focus from the people who are actually in the villa.

All told, Golden called her week-long Love Island stint “one of the best experiences of my life. Although MY person wasn’t in there, I’m still so grateful I got to connect with everyone in there. I have no regrets, but I am very happy to be home.”